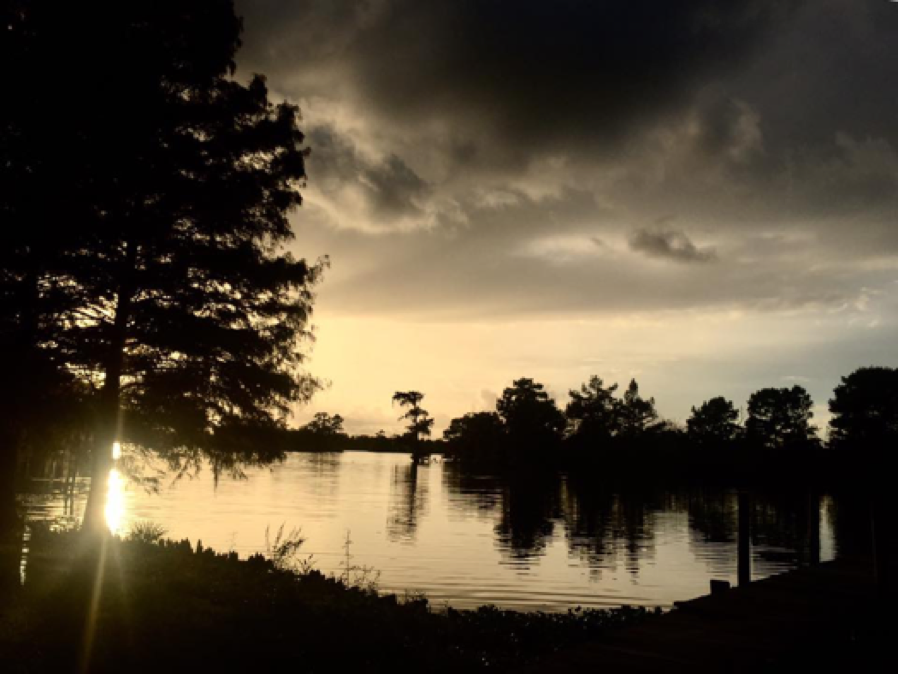 We left DeKalb just as I was to enter my last year of Middle School (8th grade back then). We landed in Dallas, Texas, for a year, then Austin, before finally settling in Moss Bluff, Louisiana. Moss Bluff is a sleepy little borough, all haunted swamps and mossy Cypress, about 20 minutes outside of Lake Charles proper. In the late 1970s the primary industry was petroleum, so much of the population was white working class. Even though I only lived there a few years, Lake Charles is the place I most think of as “home,” at least in some wistful way.

It was at Sam Houston High in Moss Bluff my innate love for music blossomed into passion. Nurtured by an amazing band director who taught me how to write down the notes that were playing in my head, I listened to everything I could to figure out the musical language my favorite bands were using. It occurs to me now that perhaps that is where I first learned to listen—and that Mr. Lambert was the one who planted that skill seed. Moss Bluff was a good season for our family. Mom and Dad were healthy—the importance of which we didn’t fully appreciate at the time. Who does though?

We took to the Louisiana culture like hogs to slop, as they say. Seemingly overnight, my mother started referring to herself as a “southern belle.” For some reason, nobody objected to this—even our friends who were native Cajuns. Everyone just started treating her like a southern belle! My mother, God rest her soul. When she got something in her head, that was it.

Our neighbors and their kids—all around the same ages as my brothers and I, adopted all of us—not just mom. They introduced us to the food, art, music, wisdom, and history of Louisiana. It was a time for storytelling on the back porch, drinking Lemonade or Gin (or both), and casually swatting flies away as the dipping sun backlit the Cypress and tall pines, turning them into ominous guardians of the sacred Louisiana bayous.

Louisiana in the late 70s-early 80s was still firmly Catholic. Louisiana has parishes, not counties. The reach and influence of the Church were impossible to miss, although it’s easier to get a drink in Louisiana (drive-through!) than anywhere I’ve subsequently lived.

By the time we landed in Moss Bluff my life was devoid of any formalized religion. We never went to church or synagogue. Yet, I had this unshakeable sense that something was happening that I couldn’t explain with my senses. In Dallas, I had started reading and collecting books about Indian Yogis and Hinduism after a French teacher “randomly” introduced me to Paramahansa Yogananda.

By the time we moved to Moss Bluff, I’d studied, at least a bit, everything from Judaism to Hinduism to Zoroastrianism. I learned about Freemasons and Rosicrucians, ancient Isis cults and, of course, Atlantis, which apparently was amazing.

I had also decided that organized religion was a crock. It seemed to me that every time someone’s teachings turned into an organized “religion” that the teaching became diluted, ignored, or otherwise murdered beyond recognition. Jesus, Buddha, Lao Tze, Mohammed—their teachings became religions which became states which became empires which continue to rule the world through the gospel of bloodshed and phobia.

My friends in high school in Moss Bluff didn’t help the cause. They believed in a version of Jesus most Christians are very comfortable with—the one and only Son of God who came to earth to save it by dying for our sins. There’s nothing inherently wrong with this idea, of course. Redemption, love, and especially, forgiveness, are all attributes that would indeed transcend humanity out of this ghastly bog of hate and loathing.

I saw no reason to believe in Jesus as a human sacrifice to a bloodthirsty overlord. I saw many reasons to believe him—the way he lived his life and the peaceful, unconditional love of God he taught. Everything he said about being fully human and fully divine. Jesus taught about waking up and being better people because the power of God—which is love and nothing but love, lives within us all. We’ve just done an exceptionally good job of smothering our innate God particles with negativity, doubt, low self-esteem (ironically, often caused by religion) and a myriad of other reasons compounded by an ever-more noisy, polluted, industrialized, globalized world.

Once stripped of thousands of years of mythology, I found in Jesus a teaching and way of life breathtakingly similar to Buddha’s. Also, my Jewish experience gave me a different lens through which to view and understand Jesus. As a Jew himself, I couldn’t fathom how Christians could so mercilessly pick on Jews—the very people who birthed Jesus! But even today I run across someone now and then who insist Jesus was not a Jew. He was born “special,” always a Christian (this happened just a few weeks ago after a Thursday night meeting at The Current).

In high school, I began to understand Jesus as a mystic. Yes, he was special, but not in the way my friends—genuinely concerned for my eternal soul—thought. I believed differently, and it kept me away from both synagogue and church for most of my life—but never from conversation. That conversation continues today, and it has drastically altered the way I view Christmas this year.