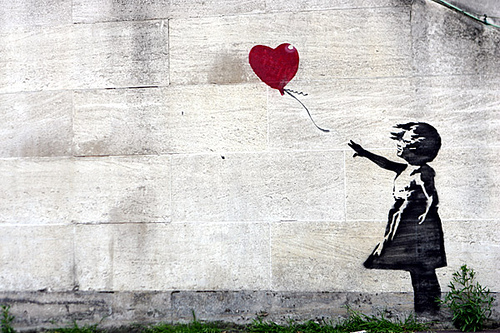 Eleven-year-old Hope flew down the brownstone stairs and bounced outside, the formidable wooden front doors slamming closed behind her like the resounding retort of a canon. The crashing of the doors echoed off the graffiti-and-ivy covered walls of her little Roosevelt Park neighborhood. A few tourists ducked. Locals didn’t flinch. They were used to this many-times-daily occurrence, the thunder of a closing door that meant Hope was on her way.

She took the weight of her name very seriously. “It isn’t a coincidence, you know—my name, Mom,” Hope once remarked. “Of course it isn’t, sweetheart! We named you after your great-grandmother.” Hope smiled, but her mom didn’t understand. Hope was more than just a name, a deterministic label like “rock” or “puddle.” Hope wasn’t just her name. It was her calling. Hope had a duty, and she knew that from the first moment she realized she could know anything.

Cheerily, Hope said, “Good morning, Mrs. Ferguson,” as she raced past her next-door neighbor’s porch. Mrs. Ferguson, weathered but merry after a lifetime of battles large and small, waved and struggled to get out of her chair. “You don’t need to get up,” Hope said. “I’m late for school! I’ll come visit this afternoon!” And she zoomed on. Mrs. Ferguson chuckled and gently sat back down, Hope’s boundless energy filling her with memories of the days when she too bounced off the fences, trees, phone booths and bus benches that lined their streets.

Hope stopped sprinting just long enough to grab her homemade bag lunch from the counter at Maxie’s Corner market. “Thanks, Maxie! I’ll be back later!” Hope yelled as she streaked in a blur of light through another door. Maxie was an old friend of the family. When Hope’s dad died last year, Maxie and his family took care of Hope every day while her mom worked. Maxie was a funny little man, the fourth generation of a family of Jewish immigrants who had always lived in this neighborhood. Maxie laughed and shouted, “Watch where you’re going, Hope! You’re going to run someone over!”

As she tore a light-speed path toward school, Hope greeted the rest of her neighbors, making her morning rounds like a doctor visiting patients. She smiled and shouted, “Hello, Mr. Oberlin! Good Morning, Ms. Stitch! What’s up, Bill? I’ll be back to visit later!” Her friends laughed as they watched Hope blaze by.

She made it to school just as the bell started ringing. With one last burst of energy, she whooshed through the classroom doors and slid into her seat. “Nice to see you, Hope!” Mrs. Sanchez joked. “Good to see you too, Mrs. Sanchez!” Hope replied. “I got a late start today.”

Mrs. Sanchez knew that I got a late start meant Hope’s mom was falling into depression again. She was probably home in bed; the covers pulled over her head, the blinds shut tightly in an attempt to hide (and hide from) the universe. Mrs. Sanchez feigned cheerfulness. “That’s okay, Hope, you made it!” Hope smiled with an honest cheer that lit Mrs. Sanchez’s heart. Hope was just being herself. It was remarkable to witness.

As the children settled into their lessons, Hope’s mind began to wander. She was troubled by her mother’s profound grief. Try as she might, when her mom got like this, there was no breaking her free from the sharp talons of an attacking raptor of melancholy. If Hope wasn’t careful, the bird would consume her, too. It was during these bouts of darkness that Hope felt least like her name. A tear rolled down her cheek. “Mrs. Sanchez?” she asked, “may I go to the bathroom, please? I’ll be back in a minute.”
---

Hope wiped her eyes with a wad of toilet paper and sat cross-legged style on the toilet seat—not so much to hide, as to not be bothered. She’d been on the brink here before and knew she needed to work through this or risk becoming lost. Despair was like Hope’s evil twin. She came out when Hope was overwhelmed—when she couldn’t say one more cheerful hello; when she didn’t feel like promising to be right back; when she just wanted to crawl under the blanket with her mother and shut the world off.

Hope worked hard not to become Despair. She was pretty good at staying light, but there were times when she felt empty. Not just out of gas, but thoroughly depleted,  a void in the universe. Maybe she took her name too seriously. Then she wondered whether her survival was even possible with a different name, like Betty or Jane. Plain Jane, she thought. That would be a nice name. Plain Jane. Instead of always being chipper, she could just be plain. Hope didn’t think “Plain Jane” was insulting at all. Plain meant regular, maybe even normal. Her life hadn’t been even close to normal since—well, since ever. And I’m only 11! She thought.

After a couple of moments, Hope took a deep breath and went back to class. She sat at her desk and focused on the day’s work. After school, she’d likely entertain Despair some more, but her twin would have to wait for now.
---

Sure enough, Despair joined Hope for her walk home. “Are you really going to stop to see everyone on the way home?” Despair chided. “They probably don’t want you to come by anyway, you know. You think everyone has time for your little visits? Ignore them. Come home to your Mother and me. We’re waiting for you, Hope! Hope? Are you paying attention to me?”

Hope heard what Despair was saying and did her best to ignore it. Hope knew that if she remained focused on Despair, she’d be sucked into the same black hole as her mother. And one of them needed to keep it together. If she wanted to rescue her mom from the darkness, Hope had to remain true to her name, her calling. She did this by remembering something Despair had helped her figure out years ago: people never lose hope. They’ll do everything they can to get rid of Despair, but even in her asphyxiating grip, people never wholly lose hope. That’s why every day on her way to school, Hope always said hello to Maxie, Mrs. Ferguson, Stitch and Bill, and everyone else in the neighborhood. That’s why she stopped for lemonade with Mrs. Ferguson on her way home; why she helped Maxie stock the shelves after school, why she listened to Bill’s tall tales. Being surrounded by her community lifted her spirits and gave her the energy to lift theirs in return. Hope is an eternal cycle of giving.

Energized by this realization, Hope sprinted the rest of the way home and bounded up the stairs into the brownstone; it’s massive doors once again booming shut behind her, alerting the neighborhood to Hope’s presence. She zoomed into her mother’s room, jumped into bed with her, hugged her tightly and said, “Hey mom, I’m home! It’s time to wake up!”