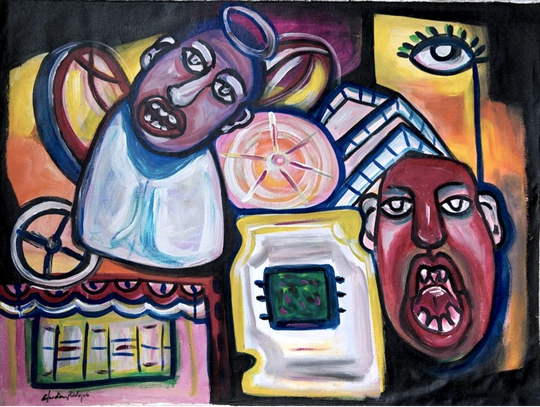 In practically any dictionary of The Bible, a saint is defined as someone “distinct because of their relationship with God.” In the ancient Jewish tradition (in Psalms 31.23 and 148.14, e.g.) the word “saint,” like so many ancient Hebrew words, has more than one meaning. For Jesus’ ancestors, a saint was someone who had an intimate, covenantal relationship with God and was also specially chosen for and dedicated to God’s service.

People were considered saints during their lifetimes—the way most of us found Mother Theresa a saint during hers. In our era, we tend to think of saints as these perfect, flawless, selfless characters, just like Jesus. But that imagery is, while not wrong, at least incomplete. Jesus neverrefers to himself as perfect. He never even refers to himself as God. Jesus is always “the son of man” (Mark 2.28, Mark 14,62, Acts 7.56, Luke 19.1, et al.). Furthermore, Jesus loses his temper, just like us. He gets frightened about his calling, just like us. He frets about whether or not he’s good enough for God’s love, just like us. If we think of Jesus as a saint and ourselves as unworthy sinners, we miss one of Jesus’ most important teachings: we’re not perfect, and that’s okay.

In the Second Testament, Paul uses the term “saints” to refer to the body of Christian believers set apart from the rest of the world (e.g., 1 Corinthians 6.2). He does this intentionally, recalling his beloved stories in Exodus when God makes the people Israel “God’s people.”

By referring to all the people in his church as saints, Paul brings the Gentiles into God’s covenant, something he thinks is his duty to Jesus Christ. By the definition of his Jewish heritage, Paul is a saint—set apart by his intimate relationship with the Christ to serve the people of God. Paul believes he is called to accomplish this by convincing everyone to follow Jesus, whether they’re Jew or Gentile, free or slave, male or female, rich or poor.

But Paul was not always this beacon of light and love, this sanctified saver of souls. In fact, Paul’s exploits as Saul are famously recounted in Acts, and in Paul’s own letters, where he confesses that he committed atrocities against his Jewish brothers and sisters simply because they were followers of Jesus.

In The Bible, we read that Paul was “zealous” for the blood of Jesus’ followers early on, until his epiphany on the road from Damascus. He has a “conversion experience.” Conversion in this instance is not a change from one religion to another—Paul always stays a faithful Jew—but a transformation from one state of being (purely human) to another (one inspired by a more intimate relationship with God).

The same is true for St. Augustine, the founder of modern Catholicism. By his own account, in his autobiographical Confessions, he was a debauched, lecherous, gambling, whoring, thieving human being. He was also a brilliant scholar and orator who had an incredible breadth of knowledge about the world religions of his time. Eventually, through his relationship with Ambrose, eventual bishop of Milan and Catholic Saint himself, Augustine was led to his own conversion experience. Late one evening, Augustine hears a child’s voice, which he takes as a sign from God. The voice tells Augustine to read Paul’s letter to the Romans, chapter 13:13-14:

Let us live honorably as in the day, not in reveling and drunkenness, not in debauchery and licentiousness, not in quarreling and jealousy. Instead, put on the Lord Jesus Christ, and make no provision for the flesh, to gratify its desires.

Paul’s sentiment hit the hard-partying Augustine hard. In his Confessions, Augustine recounted that after reading this passage, he had a mystical experience that changed the way he acted on this Earth, here and now. Augustine went from sinner to saint, one could say. He waxes eloquently about his conversion:

It’s a beautiful account of a changed heart, mind, and soul. Unfortunately, it led Augustine to horrifically misinterpret much of the Bible and conclude that all people are born sinners (the Doctrine of Original Sin begins with Augustine).

And here’s where the trouble distinguishing between “saint” and “sinner” begins as well: we are all neither and both saint and sinner. Like so many of our faith struggles, the ultimate answer to whether or not we’re sinners or saints is “both/and.” When we talk about the kingdom of God, it is “both/and”—already here yet always coming. It’s the same with Jesus, who we consider already in our hearts yet also always breaking into the world.

I think it’s interesting that two of the greatest Christian thinkers were both self-proclaimed “sinners” before discovering the Oneness with God that Jesus teaches is our birthright. It begs the question, is sin inevitable for us to recognize a change in our lives? And if we answer positively, then why do we think sin is such a bad thing? So bad, in fact, that sin can damn us to hell for all eternity?

It’s an unfortunate byproduct of Augustine’s theology that the majority of Christians for most of Christian history, have worried more about their reward in heaven than acting like Jesus in the here and now. Consequently, in order to guarantee a spot in “The Good Place” (because nobody wants to go “down there to The Bad Place”!), we run through all sorts of psychological machinations. We sometimes pay massive sums of money, we say prayers, we ask forgiveness, we confess, just like Augustine and Paul. And I promise you they were both much crueler in their lifetimes than most of us could even imagine! Still, here we are today, calling both of them saints. God's transformative power in action.

In honor of these two pioneers of Christian thought, I have a confession of my own: I am a human being. I’m not perfect; I’m just striving to do my best. On this point I agree with Paul: we who believe Jesus shows a more divinely humane way to be human are all saints because we are striving to live more authentically our God connectedness here and now. Our most ancient definition of sainthood as one who is both intimately connected to God, and compelled to live that connection here on earth, turns out to be valuable ancient wisdom.

I am in the camp of theologians who believe that it’s all good. We may be saints or sinners on this planet for this brief period in a universe that’s billions and billions of years old. Ultimately, though, we all end up back in God’s loving embrace, part and parcel of the very being of God, who is never separated from us, whether we’re gambling at the craps table or preaching on a Sunday morning. And I’ve done both. I actually have a craps game running in the back room right now.
Just kidding.

But being human means accepting we’re flawed and knowing that God is okay with that.

There’s a terrific series on NBC called “The Good Place,” in which Kristen Bell ends up in Heaven even though she’s been a pretty terrible person. A cover-up of sorts ensues, in which she tries to change so she doesn’t get sent to “The Bad Place.” It’s funny, but it’s also a brilliantly conceived device that helps us get over our preconceived notions about sinners and saints. Sure, good people go to Heaven. That’s all fine and good. But what makes God genuinely amazing, truly worthy of loving and following, is that even those we incorrectly perceive as “bad” people end up in “The Good Place”. And I know that’s difficult for humans to understand, and I know some of you are thinking about Hitler right now. So again, I emphasize that it’s God’s embrace of even the worst of us that makes God, God, and the fact we have a difficult time wrapping our minds around that idea which makes us human.

Ultimately, I believe that’s all that’s asked of us: to be human; to embrace our humanity by understanding that we are created from and in the divine cosmic consciousness. And there is absolutely no sin in that.