My Self, My God 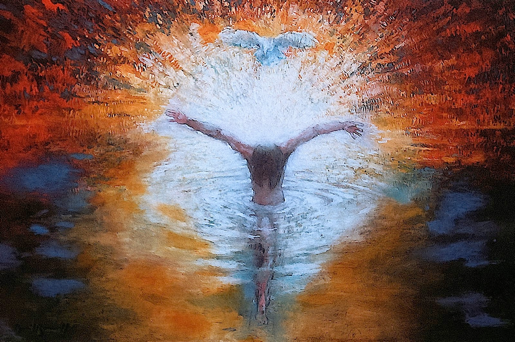 From The Gospel of Thomas (NHC II, 2): Jesus said, “If those who lead you say to you, ‘See, the kingdom is in the sky,’ then the birds of the sky will precede you.  If they say to you, ‘It is in the sea,’ then the fish will precede you. Rather, the kingdom is inside of you, and it is outside of you. When you come to know yourselves, then you will become known, and you will realize that it is you who are the sons of the living father. But if you will not know yourselves, you dwell in poverty and it is you who are that poverty.”

The Gospel of Thomas is a collection of traditional sayings attributed to Jesus. Most scholars agree that the remarks in The Gospel of Thomas are preserved in a more original form than the parallel quotes in the canonical gospels. Some of The Gospel of Thomas seems to have influenced The Gospel of John in the Second Testament. Either way, Jesus proclaims some very gnostic ideas: God is within. We must first know ourselves if we are to intimately know God.

In Luke 8:9-10 we’re told that Jesus’ disciples asked him what the story meant. So he answered, “I have explained the secrets about God’s kingdom to you, but for others I can only use stories. These people look, but they don’t see, and they hear, but they don’t understand.”

Today, it seems obvious that spirituality requires contemplation and deep, difficult, self-examination. The practice of seeking answers from God within reveals the intimate depth of our relationship with God. This divine connection realized and enacted leads us to consider profoundly what it means to be human. If we’re serious about spiritual development, we cannot help but understand all life as part and parcel of God’s intimate, infinite, living tapestry. This understanding, once acted upon, leads us to unconditional, even reckless love.

Once we start looking inward for answers, rather than to self-proclaimed authorities, we neverstop thinking about what it means to follow Jesus. Once we feel God ‘click’ in, even for a femtosecond, we’re always analyzing what it means to proclaim one's self “religious” or “faithful” or Christian, Jew, Muslim, Gnostic, Agnostic or Atheist. Most of us will proclaim more than one spiritual label through our lives.

This ability to self-reflect and to accept or reject portions of various religious teachings was not always encouraged. For many centuries, thinking outside the self-established status quo could get one imprisoned or put to death. Have you thought about the term status quo? Why is it not okay to resist the status quo? Who decides what is and isn’t status quo? These questions are also at the heart of early Christian discussion, and the Nag Hammadi manuscripts reveal just how diverse the early conversation was. And how crushing the jackboot of the new religious status quo.

As Christianity was organizing into what would quickly become Rome’s religion of choice, it first diverged into many sects. The fledgling Roman church became concerned with keeping what they believed was a line of teaching handed down from Paul and Peter, both directly taught by Jesus (in physical or spirit form).

This lineage became known as the Apostolic tradition, so called because the newly developing clergy class claimed their teaching—and more importantly, their hierarchy—could be traced back to Jesus and the original apostles.

The Gnostics were more interested in putting the teachings and spiritual revelations of Jesus into practice. They rejected the idea of a single “correct” teaching and the self-proclaimed status quo of apostolic tradition. People could call themselves “Priest” and “Bishop” all day long. To the Gnostics it meant nothing.

This did not sit well with a religion that was now created in the image of the Roman Empire.

It’s important to remember that Gnosticism existed for hundreds, perhaps thousands of years before Jesus was born. Wisdom schools predate even Judaism. The ancient Persians practiced Zoroastrianism, a very early form of wisdom religion. The First Testament includes a number of wisdom texts and teachings like Sirach and Enoch. Jesus and the gospels about him often quote Jewish wisdom literature, and in the Qur’an Jesus is more wisdom teacher than supernatural sacrifice.

People of the Ancient Near East—proto-Iranians, Israelites, Babylonians, Indians, Iranians (née Persians) and others, shared their religious myths and influenced each other’s sacred texts.

Those who sensed a more mystical teaching to Jesus’ parables were drawn to these ancient teachings as well, finding deeper spiritual thought about the meaning of being than the new “orthodoxy” offered. These new, Gentile Christians—the first generation after the split from Judaism—believed Jesus revealed a “secret” wisdom teaching. Gnostic Christians therefore focused their energy not on world-building, but on Christ’s revelation of world-changing divinity within all humans.

Gnostics understood that emulating Jesus in thought and action could ignite an intense change of being. This change was a personal journey that required every initiate to do the hard work of honest self-examination. Gnosticism required deep self-psychoanalysis long before the term was coined.

Christian Gnostics saw Jesus as the revelation of humanity’s full potential. By following his teachings, the Gnostics believed they could ascend to wholeness with God—here and now, not in a life after this. Importantly, no religious hierarchy was required to achieve an enlightened, Christ-like state. In fact, having someone tell you what to believe and how to follow Jesus was not just wrong. For the Gnostics, it was pure evil.

This is not to imply that community in general didn’t matter to Gnostics. They weren’t monks. Gnosticism involved meeting in community. Unlike the religious authorities created in the Roman church, Gnostics focused on helping each other through a series of spiritual realms. While varied, most gnostic myths and practices involve the evolution of our souls. By utilizing spiritual practices, the soul works through a number of spiritual realms (called “Aeons”). Each Aeon is a superior level of spiritual awareness. For Gnostic Christians, Jesus the Christ is the perfect representation of the ultimate Aeon—oneness with God.

As do many Christians today, Gnostics understood Jesus as a religious rebel calling humanity to action. Jesus teaches that focusing on God living within us is the way to break the illusions of this reality that create terror and selfishness. Jesus is our re-integrator, the one who shows us God and human are so intimately entangled that the two can never be separated. For as I contemplate myself, I contemplate my God.

While they practiced it in different ways, the early orthodoxy and the Gnostics seem to have both understood: we can never be rent asunder from the love of God because the core of our being is the love of God.

God is what we are, whether we acknowledge that or not. It is in the act of acknowledging, however, that we begin to fulfill our destiny as wholly divine entities.

When we experience divine connection to all life in all imaginable dimensions of time and space, we begin to glimpse the real power of a Christ connection. We begin to understand the draw of the mystical. We do the real work of spiritual ascension, of awakening to the kingdom of God that is already here, just behind the veil of our artificial intelligence, by sharing and thinking and serving each other. And it all comes without any help from people who claim, even today, to have an exclusive link to God; who “know the truth.” We all know the truth. We need no mediator in our quest to become more humane by first becoming more interconnected with our divine God within.

Jesus’ truth, his not-so-secret-wisdom, is that we are all divinely linked—to God, absolutely, but even more remarkably, through God to each other. God’s love creates a new reality that pours forth from deep within human consciousness, igniting our inner Christ and creating us anew.