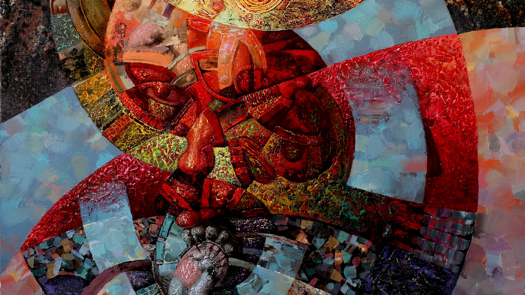 Mechanism of Perception by Dimitri Strelkov

Mark 10.46-52
Jesus and his followers came into Jericho. As Jesus was leaving Jericho, together with his disciples and a sizable crowd, a blind beggar named Bartimaeus, Timaeus’ son, was sitting beside the road.

My first question after reading this story is whether it’s about sight or seeing. And I don’t mean to be glib or play semantic games. I honestly believe there is a difference in philosophical meaning between sight and seeing—and this is especially true in the context of Mark, written in the 1stCentury CE by and for people who understood the power of metaphorical storytelling far better than we.

Our natural tendency when we read this story is to assume Jesus restored Bartimaeus’ physical sight. That leads to all sorts of erroneous conclusions about miracles and Messiahs. Reading the story as a physical healing also moves the focus of the story to Jesus. Poor Bartimaeus is reduced to a prophetic cog in the mechanics of Mark’s ham-fisted attempt to reveal Jesus as a Messianic “fulfillment of prophecy.”

If we instead examine this story as a spiritual parable (which is how I encourage everyone to interpret everything in The Bible), this story is about Bartimaeus (who represents all of us, of course), not Jesus.

Honestly, we should try reading bible stories with the idea that none of them are about Jesus, per se. Instead, they’re about the people Jesus meets in his ministry and the way they respond as Jesus helps them discover their own Christlike God-connection for themselves. Jesus doesn’t do anything for anyone. He teaches them how to do it, or, as in the Bartimaeus' story, says merely, “Go, you can already see, you’ve always been able to see, just do it.”

Why shouldn’t we think that Jesus, the most spiritually attuned, God-connected being that ever existed in the flesh, wouldn’t want to teach us how to do that for ourselves, too?

If you teach a man to fish… Remember that one?

The Bartimaeus story is not about the miracle of Jesus restoring sight. In fact, that’s never mentioned in the story. In the parable, Bartimaeus can see. This is not a story about a blind man suddenly seeing Jesus standing before him as a bewildered crowd looks on. No, this is a story about seeing differently, not with our eyes, but with our hearts. This is a story about changing our perception, and how that change awakens us to a new universe, a new world, an entirely new way of existing as a human being—as a CONSCIOUS human being.

Jesus begs his followers to see not just the world differently, but to perceive a new reality. He urges this because he is operating with a different perception of reality. He can see beyond this sensory world into a dimension more attuned to the only genuinely universal law: love.

Jesus sees “the nature of things,” rather than their worth as objects. It’s a mystical perception of the world. He sees the love of God imbued in everything and everyone, and that’s why it seems he does these miraculous healings. In fact, Jesus isn’t doing the healing, because he knows there is no healing to be done, at least not physically.

I think that for Jesus, “healing” meant, ultimately, to change one’s perception of the world from one based on the outer worth of an object to one based on the intrinsic value of love shared by all of us. Our job, our DUTY as followers of The Christ, is to look through the outer appearances of a world gone mad and into the loving core of truth that exists deep within: there is nothingbut God and God is love. Anything else is an incomplete perception.

If we really want to change the world we need to not only work hard to create equality and compassion, we also need to change our perception of the world as a place of give and take, us and them, winners and losers. I believe this drastic change in conscious connection to the ultimate Universal Consciousness is impossible without intense, deeply self-reflective spiritual practices, the type taught by Jesus of Nazareth, Siddhartha Gautama​, and others. Truthfully, what we're ultimately after is a mystical experience—the kind Jesus shows is entirely possible when we learn how to see differently.