- March 09, 2016
Hopefully, we are now at the point on our Lenten journey where we’re starting to learn some new things about our true spiritual identity. There is a much higher state of being buried deep within our psyche. Throughout our lives, that higher state—our true self—claws and scratches its way to the surface, revealing clues to the meaning of life and the nature of identity along the way. Most of the time we fail to notice. We write the revelations of our souls off as dreams (or nightmares). We relegate the quest for meaningful answers to life’s deepest mysteries to philosophers and college students, and sometimes we ridicule both for wasting their time.

But philosophy is a peculiarly human trait, and without asking questions that seem unanswerable, there would be no art, culture, or even science. Working to become a more enlightened being is never a waste of time. From where do we come? Why are we here? Where are we going? Is this all there is? We wrestle with the meaning of life both esoterically and scientifically. Often the two disciplines lead us to similar answers. Where science and philosophy intersect, we find much deeper truths—as in the implications of string theory and quantum physics about the fundamental building blocks of all life and the very nature of self-consciousness.

I also like to compare the messages from different spiritual traditions, particularly Buddhism and Christianity. Jesus and Buddha have very similar stories. Over the years, I have found that where these spiritual traditions present similar ideas, there is profound truth and meaning. 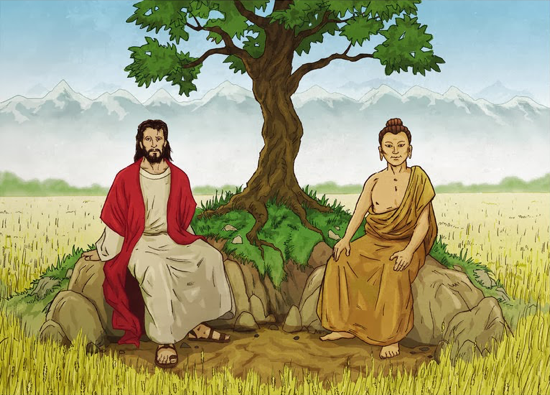 For example, the 40 days Jesus spends in reflection in the desert are similar to Buddha’s 49 days under the Bodhi tree. For both ascended masters, these events are their turning point, their “a-ha” moments when they finally realize who they are and how they are to proceed with their ministries. Both have come through long periods of physical denial. Jesus fasts in the desert; Buddha fasts to the point of drying up and almost withering away. It’s only after Buddha hears a group of young girls playing a lute that he concludes extreme physical suffering is a poor path to spiritual enlightenment:

This is the same message we see Jesus deliver time and again in the Gospels: If someone is too rich, it tends to make them disconnected and disinterested in the needs of the rest of society. If someone is too impoverished, it is impossible to care about anything other than survival. It is the middle ground that allows us to think deeply and act with concern for society as a whole.

Like the strings of a lute, when we are in perfect spiritual tune, we become the song of God and play more in tune with God consciousness as we approach a more enlightened state of conscious being. It’s also no coincidence that Buddha talks about the Way to Truth and the original followers of Jesus were called, not Christians, but people of The Way.

Buddha’s enlightenment comes when he is 35 years old—about the same age Jesus was when he was crucified. Christians tend to get hung up on the crucifixion, but Jesus’ crucifixion and death are not the points of the story, regardless of what many modern Christians believe. The point of Jesus’ story is not his death, but the resurrection and, even more importantly and more forgotten, the ascension that happens after the resurrection.

It’s a lot more difficult to get to the point of the Jesus story than the Buddha story because Jesus’ story is wrapped in ancient Jewish metaphor that has been taken out of context and read too literally for about 1500 years. It’s a pity, because it’s sidetracked the point of Jesus message: We are meant for something more, and we can be something more if we will only take the time to become more enlightened, which then allows us to lead our brothers and sisters in poverty and slavery out of poverty and slavery, to places where they can also find their enlightened state.

Read the end of Buddha’s enlightenment story, and as you do, think about Jesus. Perhaps this meditation will help you—as it continues to help me—find new ways to think about what it means to be a Christian—a follower of the way of Jesus, as we enter these last days in the Lenten desert:

Still seeking a way to understand the meaning of life, Siddhartha set out for Buddhagaya. Near a grove, he sat down under a huge Bodhi tree. Silently he vowed, "Even if my flesh and blood were to dry up, leaving only skin and bones, I will not leave this place until I find a way to end all sorrow." He sat there for forty-nine days. He was determined to discover the source of all pain and suffering in the world.

Mara, the evil one, tried to scare him into giving up his quest. For instance, he hoped to lure Siddhartha into having selfish thoughts by sending visions of his very beautiful daughters. But the Buddha's goodness protected him from such attacks.

During this period, Siddhartha was able to see things as they truly were. Now he had finally found the answer to suffering: "The cause of suffering is greed, selfishness, and stupidity. If people get rid of these negative emotions, they will be happy."

During a full-moon night in May, Siddhartha went into deep meditation. As the morning star appeared in the eastern sky, he became an enlightened one, a Buddha. He was thirty-five years old.

When the Buddha stood up at last, he gazed at the tree in gratitude, to thank it for having given him shelter. From then on, the tree was known as the Bodhi tree, the tree of Enlightenment.*

Now, compare that story with the story of Jesus in the Wilderness found in Luke 4:1-13:

Jesus, full of the Holy Spirit, left the Jordan and was led by the Spirit into the wilderness, where for forty days he was tempted by the devil. He ate nothing during those days, and at the end of them he was hungry.

The devil said to him, “If you are the Son of God, tell this stone to become bread.” Jesus answered, “It is written: ‘People do not live on bread alone.’” The devil led him up to a high place and showed him in an instant all the kingdoms of the world. And he said to him, “I will give you all their authority and splendor; it has been given to me, and I can give it to anyone I want to. 7If you worship me, it will all be yours.” Jesus answered, “It is written: ‘Worship the Lord your God and serve him only.’”

The devil led him to Jerusalem and had him stand on the highest point of the temple. “If you are the Son of God,” he said, “throw yourself down from here. 10For it is written: “‘He will command his angels concerning you to guard you carefully; they will lift you up in their hands, so that you will not strike your foot against a stone.’” Jesus answered, “It is said: ‘Do not put the Lord your God to the test.’” When the devil had finished all this tempting, he left him until an opportune time.

After this, Jesus returns to Galilee “in the power of the Spirit,” which is a 1st Century Jewish metaphor for enlightenment.

Both stories are about finding an enlightened state of being. They are about an insightful change that gets us out of the cycle of greed—and stupidity—we so often find in the world—and ourselves, unfortunately.

When we stop to get off the merry-go-round of merely surviving and take some deep breaths under the Bodhi tree, we too become empowered by the Spirit, enlightened, introduced to our higher self. Then, we can begin the very hard yet very necessary work of seeing the world as it truly is, and getting about the business of changing everything by first changing ourselves.

Meditation: Reveal yourself in me, God of all things. Make me gentle, careful, and loving. I am ready to wake up!