- March 29, 2016
Jesus has died and been resurrected, so now what? As his followers, how are we supposed to react? In Mark, the oldest of the four Gospels, we see that Jesus’ original followers react with horror (Mark 16:1-8). They run away from the empty tomb and don’t say a word to anyone about what they saw—or in this case, what they didn’t see, namely, Jesus’ body.

Obviously, though, the two Marys eventually told someone, as here we are today, about 2000 years later, still talking about Jesus and the resurrection. 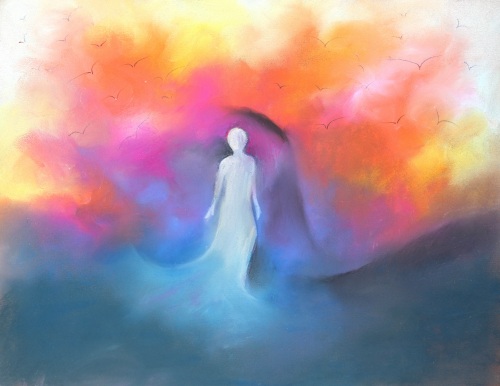 It was the occupied territory of a people—the Jewish people—with a history that was thousands of years old, with traditions and culture and literature and a very defined sense of self as a people—specifically, as God’s people.

Over the thousands of years of development of Jewish culture up to the First Century CE, when Jesus lived in this occupied territory, the Jews created a deep and complex spiritual identity.

EVERYTHING we read in the Bible draws from this identity, and the problem we have today with stories that seem impossible to believe—like resurrection—is that we are not people of that same identity. We have no inherent knowledge of the background and subtleties of the biblical stories the way the original audience did. The authors of the literature in the Bible were Jews writing to Jews who all had the same many-thousand-year history. They could say things without setting up the background, and expect the audience would get it.

It would be like any of us expecting George Washington to come to 21st Century America and understand anything we have to say. How do you think ol’ George would react if we told him he was on fleek or rad or even cool? He’d think we’re talking about temperature, or possessed by demons, and then everything would escalate… well, you get the picture.

You see what I’m getting at here? Context.

So when we read about the resurrection of Jesus, we have to do our best to understand the context—not only of First Century Palestine, but also of the thousands of years of Jewish culture leading to that time and the subtleties of the resurrection story the authors presumed their audience would understand.

That takes a lot of work, otherwise we end up reading the resurrection story literally, and while that might or might not be true, it doesn’t really make any difference, because the point of the story is in the meaning of the event, not the event itself.

The resurrection story is meant to stimulate our thinking and make us ask, as it was intended to make Jesus’ earliest followers ask, "Now what? What am I called to do, as a follower of Jesus, if I understand that Jesus died on the cross in utter faith to God, dedication to his people, and protest against the status quo? What am I called to do in response to this revolutionary, subversive act?"

Make no mistake: Jesus’ death on the cross is an act of subversion. It is perhaps the ultimate subversive act. And also take note: If we are to understand the crucifixion and resurrection as a call to action, we have a personal responsibility to be active participants in the story. It’s not and cannot be all about Jesus dying to save the world cosmically, as some, like Paul, conclude (although I think that’s a misinterpretation of Paul, but that’s a different discussion).

When we think about Jesus’ journey, it almost had to end in resurrection—not for some sort of sacrificial atonement, but because Jesus subverted the status quo his entire life. He calls out the establishment for not practicing what they preach. He calls out the upper class for hoarding rather than sharing. He calls out normal people for thinking that normal means helpless.

And for people in an occupied territory, the resurrection story conveys hope that death at the hands of Empire, no matter how cruel or violent, can never undermine God’s love.

Empires come and empires go, but the love of God—shown by Jesus to be manifest in every single one of us, is eternal.

At the deepest spiritual level, I think that the resurrection story about Jesus is meant to call us to remain hopeful even when the empire is beating us to death. It reminds us to have the faith of Jesus and the deep, intrinsic connection to God of his Jewish people.

In Jesus’ resurrection we find the courage, the wisdom, and the love to defeat all the ways empires find to occupy the homeland of our souls. Yet, remaining empowered by God’s infinite, unconditional, loving energy, we get up—over and over again.

Jesus reminds us not only to continue to changing the world even after we’ve been knocked out, but he shows us how miraculous we can be when we remember that God imbues us with incredible strength—the ability to feed thousands, to heal the wounded, to mend divides between families, and eventually, to overcome the sting of death itself by understanding we are more than our flesh. We are eternal love.

So, what now? We must continue to die to the corrupt thinking and activity of the empire that enslaves us, and continue to convince others that the ways of the world are completely out of phase with the loving nature of God.

Now, we remember we are tasked to be and act just like Jesus: a light of love in a dark world; a voice for the voiceless; unwaveringly committed to God as the ultimate love of the universe; willing to put the needs of the many over the needs of the few—or even the one, as Jesus so breathtakingly showed his willingness to do on the cross.

What do we do now? We remember that we are God’s people, now and always.

And now and always, we love the world as compassionately as the man we claim to follow.

Meditation: God is love, and love is all.