What a Magnificent Mess We've Made 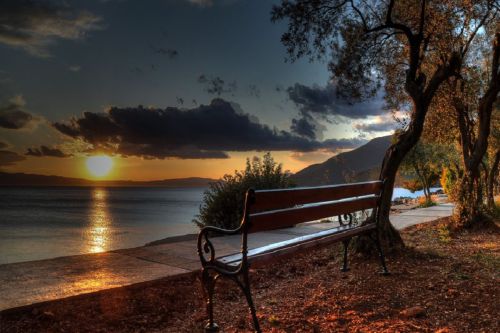 It seems to me that one of the major storylines weaving throughout the Bible is about just how often we human beings mess up. The book has even been assembled so that, pretty much as soon as humans enter the scene, we manage to screw up our perfect existence in paradise with God completely. Temptation rears its ugly head and, well, it's pretty much all downhill from there.

Consequently, we’re told we’ve been “forced” to leave what is described as a place of calm and beauty, where all creatures live in harmony, where there is no shame, no fear.

Humans. Give us something beautiful and we’ll do our best to obliterate it. Am I right?

As the stories in the Bible progress, we’re introduced to character after character who has, in one way or another, made a total mess of their lives. Moses kills an Egyptian taskmaster, then covers up the murder and leaves Egypt under an assumed identity to begin an entirely new life. Moses messed up.

There’s King David who, while God constantly leans on him to lead God’s people, David also breaks at least half of the ten commandments. King David messed up. Royally.

How about Simon Peter, who, when the going gets tough, denies ever knowing Jesus? Three times? Peter messed up.

And then there’s Paul, the former Saul of Tarsus, the man one could easily argue is most responsible for the existence of the religion known as Christianity today. As you recall, Saul initially ruthlessly hunted down and murdered anyone he found associated with the Jesus movement. Even Paul messed up.

You know why all these people messed up? Because they were human.

Today, we read these stories and think, “Oh, Saint Paul was amazing,” or “Saint Peter was... such a saint” or “Moses led his people to freedom,” but that’s because we’ve exalted all these folks to places of high honor. And while it’s certainly more than appropriate to respect these people, exalting them reinforces the idea subconsciously that we could never do such great things. We forget that these people weren’t perfect. In fact, in most cases—King David and Paul specifically, they were pretty horrifying individuals.

When these stories were written, I think part of the point was for the ordinary folks hearing, and later, reading them, to understand that God does incredible things through us, ordinary folks.

The Bible is a book of stories about ordinary people who have extraordinary experiences. But when we read it and make the characters into superheroes, we miss a significant part of the point. These are our stories.

This book is about us—you, and me, and every human being who ever messed something up royally in their lives. And that’s every single one of us.

Yes, we’ll mess up. Yes, we’ll wrestle with our spiritual demons like Jacob. We’ll run away from God like Jonah. That’s what being human is all about. It’s a mess. A glorious, God-given gift of a mess. But you know what? Messing up means we’re at least trying. We’re trying to comprehend why we’re here, how to get along with each other, and if there is more to life than simply working ourselves to death.

I don’t think anything in the Bible sums up the idea that we should embrace all the messiness of our lives—and enjoy our lives, not toil until we die—better than Ecclesiastes. While people often read it and think, “Jeez, what a downer. Everything is pointless. Really?” Ecclesiastes says nothing of the sort.

The ultimate conclusion Ecclesiastes’ author, Qoheleth (which most likely means “teacher”) comes to is that life is meant to be enjoyed to its fullest.

We are expected to make a mess of things—in fact, it’s unavoidable. If we are trying to live, we will sometimes make a mess. Being human means messing up. For Qoheleth, that means eating and drinking new things, traveling to new places, meeting new people, and this is important: always questioning the status quo.

Ecclesiastes asks us to push ourselves way outside our comfort zone, to take a look at the status quo and always decide it needs to be changed.

Qoheleth was railing against the status quo of his era. In fact, centuries later, when the Bible was taking shape, many, many people lobbied to exclude Ecclesiastes from the finished product. They found it do be a downer, and they didn’t understand what Ecclesiastes had to do with God, or the good news of Jesus Christ, the lens through which they were putting the Bible together. Thank God Ecclesiastes’ fans’ won the day. It is by far the most philosophical work in Scripture.

I find Ecclesiastes to be an incredibly hope-filled work. After all, it compels us to live life to the fullest and to go ahead and accept that we’ll mess up now and then. We're even told that when we do mess up, God still loves us. And God will help us through the mess we’ve made.

Isn’t that the Gospel of Jesus Christ?

At this point, some of you might be asking, “if that’s true, if God is with us when we mess up, and if it’s the expectation that humans will mess up, then why kick us out of paradise in the first place?”

Well, let me answer that question with a question: “How can we possibly be fully human without the opportunity to get messy now and then?” Living in Eden with God is awesome (I assume), but it's not really a human experience, is it?

No. Ecclesiastes describes what being human is about: It’s difficult. Frustrating. Filled with regrets and do-overs. It often seems pointless, a chasing after the wind. But rather than thinking of that as some sort of Divine punishment for eating a piece of fruit, Ecclesiastes forces us to consider that messing things up is the beauty of being human. And do you know what makes our messy, frustrating human lives so beautiful?

In every one of the stories mentioned above, someone forgives someone else for the wrongs they’ve committed, just as we believe, quite powerfully, by the way, that God forgives us for simply acting like humans. Perhaps we weren’t kicked out of the garden as much as we were nudged out to go and experience life to its fullest, as Ecclesiastes suggests.

Ecclesiastes 8:15 So I commend the enjoyment of life because there is nothing better for a person under the sun than to eat and drink and be glad. Then joy will accompany them in their toil all the days of the life God has given them under the sun.

We try so hard to be perfect—to say the right things, to behave in some way we believe society will approve. But this is exactly what Ecclesiastes is railing against. Qoheleth  says, “Don’t let society tell you who you are, or what to be or how to act or how to worship or who to love. Life is for living, and that is all life is for. Life is fleeting, so make the most of it while you’re here.”

If God has desire (a big if) then I believe that’s what God wants for our souls—a lifetime of experiences: the good, the bad, the ugly, the triumphs and the tragedies. God embraces it all, because God embraces us all, every single imperfect, tortured, messy, beautiful, blessed, cherished life.

So go ahead. Take chances. Make mistakes. Get messy. Be human.