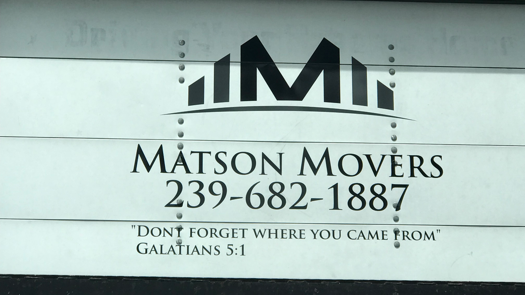 As I was driving to church one day, pondering my presentation for Sunday and wondering if the Scripture I’d chosen really conveyed my idea, I saw this truck in front of me. After immediately proclaiming THANK YOU to the universe, I snapped the photo above so I would remember the quote and to look up Galatians 5.1 when I got to the office (No, I do not have large swaths of The Bible memorized).

I understand how this sort of thing happens because I’ve always had a selective memory myself. I remember dates, facts, and figures reasonably well. I’m really good at Trivial Pursuit. Memorizing speeches, sermons, lines in a play—none of that comes naturally for me. In high school, I could memorize all the music for marching band, but learning one song took hours and hours.

Eventually, I started playing in bands that cover other people’s music (which is the majority of work for a professional musician). To learn a song, you have to listen to the original and learn your part. In my case, I would learn horn and keyboard parts, as well as the chord changes and forms of the tunes so I could cue and conduct.

This means listening to portions of the song at a time, over and over, until you hear what you think are the parts the musicians are playing on the record. Then the band rehearses and gets everything sounding great. You start playing the song live. Back in the day, this meant five or six nights a week, sometimes twice on a Sunday.

After you play a song every night for a few weeks, you get to know it well. That’s what someone means when they say they got the part “under their fingers.”

So, let’s say you play the song for a few months. What happens next is that one day you’re driving to the store and the original tune comes on the radio. You cock your head like a curious puppy and think, “Wow! That is not what I’m playing.”

That’s fine because when you play a song live, it evolves and becomes its own thing, different from the original. What we memorize is a copy, but not an exact copy, no matter how faithful to the original we think we are.

And so it goes with memories. They are never exact copies of the event itself, only softly-held whispers of a tune we alter without noticing.

Memories are more than mental recollections. They are physical marks imprinted like a branding iron on the neural network that is the human brain. I’ve never thought much about memories as something physical. I guess I always assumed memories were somehow stored electronically, similar to binary code in a computer. The reality is much more complicated.

In the 18th Century, scientists began to theorize that memories were somehow encoded in the nervous system. That’s also when Herman Ebbinghaus did the work leading to our contemporary understanding of sensory, short- and long-term memory.

It was the beginning of the 20th Century when German evolutionary biologist Richard Sermon proposed the groundbreaking idea thatlife experiences leave a physical trace. He called these traces engrams; a term still used today to describe the imprints every event in our lives leave on the brain.

Every event in our lives leaves a physical imprint on the brain.

Neuroscientist Ashish Ranpura says that “Fundamentally, memory represents a change in who we are. Our habits, our ideologies, our hopes and fears are all influenced by what we remember of our past.”

I had to reread that idea several times. Memory represents a change in who we are.

Perhaps that’s why the people ofThe Bibleare so concerned about remembering. They remember the trials and tribulations of being alive. They turn some of those memories into festivals and celebrations designed, ultimately, to help them remember they are people of God, to help them remember who they are, and to acknowledge how their memories have affected who they are as a people now. Once again, the example of these ancient authors is to stop and think about the journey, both personal and communal, all of it single-sourced from God, the consciousness of all being.

Never forget where you come from.

Here at The Current, we like to remember that all beings are interconnected. I think it’s more important than ever to remember those connections are formed from God, the ultimate love of the universe.

Remember who you come from.