What Is Necessary? Part 1, Jesus 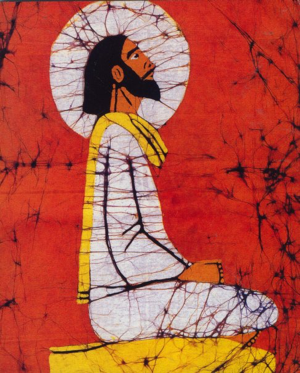 Matthew 3.13-15 (CEB)
At that time Jesus came from Galilee to the Jordan River so that John would baptize him. John tried to stop him and said, “I need to be baptized by you, yet you come to me?” Jesus answered, “Allow me to be baptized now. This is necessary to fulfill all righteousness.”

Luke 24.25-26
Then Jesus said to them, “You foolish people! Your dull minds keep you from believing all that the prophets talked about. Wasn’t it necessary for the Christ to suffer these things and then enter into his glory?”

Acts 4.12
Salvation can be found in no one else. Throughout the whole world, no other name has been given among humans through which we must be saved.”

We were moving our son into his dorm in New York recently. While we were there, we visited one of our favorite charity thrift shops. The kids are great thrifters. They’ll look at second-hand clothing, shoes, bags, and tchotchkes for hours. I look around the store more quickly, maybe trying on a shirt or two before I find something to read from the used book rack and settle into a comfy chair for the duration. And I do mean settle in. I've finished "War and Peace" in one thrifting session.

In this particular, somewhat peculiar shop, I discovered a book called Shantaram. It’s set in modern-day India and describes the country in a way only someone in love and awe writes about things. It's not blind love. It's love even through hurt and pain and suffering. It's unconditional love of every magnificently odorous nook and cranny of India, the good, the bad, and the ugly.

As the book opens, the main character, Lin, has escaped imprisonment for armed robberies in Australia. He’s traveling with a fake New Zealand passport when he arrives in Bombay.

Lin hires a guide, Prabu, and in quick time they become friends. Through Prabu’s contacts, Lin is also befriended by a variety of dreamers, malcontents, government officials of various ranks, and scoundrels who have an uneasy respect for one another. They also have a keen understanding of the intricacies of the corrupt order of things, a stable system of bribes and favors even while the cast of players is ever revolving.

After several adventures, Prabu invites Lin to his home village, a tremendous honor. Prabu is inviting Lin into the family. Honored, Lin accepts.

Chances are that even if one has never been to India, they are familiar with its notoriously overcrowded train system. There is no reserved seating in the general classes and the train cars are filled with many more people than seats. The fight for a seat is a brutal, cacophonous maul of a ritual as passengers kick, scratch, and beat each other for seats like hippos fighting for dominance at the waterhole.

In this scene, Prabu has stretched himself across an entire bench seat, saving a place for Lin even as others attempt to remove him from his position by tearing at his flesh, kicking him in the ribs and beating him over the head.

Prabu withstands the attacks and manages to save the seat for Lin.

Lin, of course, is astounded, riddled with guilt, and heartbroken that his friend would make such a sacrifice for him. Prabu, as Lin’s guide, considers it nothing more than part of his job. As they’re discussing the situation, the train begins to take off. Suddenly, the cacophony of violence stops.

A new protocol takes place once the train is in motion. As if God pressed pause on an iPod, the train falls virtually silent. Everyone sits quietly and politely, wherever they are. There is respect for personal space, as much as possible on an overcrowded train, to the point of people apologizing to one another if one foot even gently taps another in passing. It’s a stark contrast, the vicious boarding process and the serenity of the train ride.

At first, Lin can’t comprehend the dichotomy and is understandably shaken and angered by the experience. Over time, he learns there is an “unavoidable and unspoken question in all of India: What is necessary?” What is necessary in this situation? In a country that is overcrowded by billions of people, is it necessary to respect the rules of overcrowded spaces and the tranquility of my fellow travelers? Is it necessary to claw my way to a seat in order to visit my family or get to my job? To live in a slum to shelter my family?

In the book Shantaram, it’s a question asked not only about individual beliefs and actions, but also about governments, religions, and other institutions to which we (mostly willingly) forfeit some of our brain space.

I’ve been asking what is necessary about religion and faith, both personal and corporate, for as long as I can remember. I’m fascinated by the things people will believe and the reasons they give for believing them. So, for the next few weeks, we’re going to ask ourselves what is necessary for us to believe about certain aspects of Christianity. I expect answers to be slightly different for all of us, and that’s okay.

I think some Christians are scared to honestly share what they believe because, in America, we’re told that all Christians are supposed to believe the same thing. But let me say right now, believing the same things about Jesus and Christianity is not necessary for one to claim Jesus as their Buddha, Savior, teacher, or guy they occasionally think about.

Discussions about who Jesus was and what he taught began moments after he died and continue to this day. There is not now, nor has there ever been one homogenous “Christian” belief system. So, there are no “wrong” answers, only answers that are right for you right now. Answers that will—and should—change over time as we all go ever deeper into our spiritual being. In contemplating “what is necessary?” for your Christianity (and perhaps it's not even called Christianity) I hope you’ll discover both new answers and new questions.

We begin then, this week, talking about Jesus.
What is necessary for you to believe about Jesus?

CHRISTOLOGY
In the places where people all have beards, smoke pipes, drink fancy bourbon and wear corduroy jackets with elbow patches, they call the topic of Jesus, Christology. It concerns the way we think about the idea that Jesus represents something both fully human and fully divine.

In general, a person has either a high or a low Christology which determines whether we call Jesus something exalted like “Son of God,” or “Savior,” or something more down-to-earth like “teacher” or “rabbi.” In this case, "High" and "Low" have no ranking significance. They are simply different ways to think about Jesus as divine, or heavenly (high above this mortal coil); and/or earthly, mortal, flawlessly flawed.

People with high Christologies generally think God worked through the crucifixion of Jesus to repair the human/divine relationship. People with a high Christology often say Jesus “died for their sins,” but that’s not necessarily true for all folks who understand the important idea behind a divinely human Jesus.

A person with a low, or what I would call humanist Christology, generally uses the language of "following" rather than "believing in" Jesus. The human aspects of Jesus’ life, especially service to systematically oppressed people, are more important than the idea that God incarnated to be crucified for our salvation. People with low Christologies often think it is the divine love exemplified in Christ that motivates us to serve. Jesus saves not literally through death, bloodshed and resurrection, but by showing us how to live in an ascended state of being here and now.

A new world ( a “saved” world in middle-ages parlance) comes about when we discover our own Christ connection and begin acting like Jesus: compassionate, loving, a force for social and political change, tuned into God’s universal and unconditional love all the time.

So, let’s see where we all fall in the Christology spectrum. Ask yourself, what is necessary for me to believe about Jesus? And as we’ve been discussing, don’t forget to ask why you think what you think. Journal your ideas so you can refer to them again later. If you want to discuss, just shoot me an email: pastormichael@gowiththecurrent.org

Question: What do you find necessary to believe about Jesus? Why?