- March 10, 2015
A new fossilized jawbone was recently discovered in Ethiopia. This discovery pushes the arrival of our species back on the evolutionary ladder by almost half a million years. This discovery is exciting for a number of reasons, not the least of which is as a reminder that evolution is a very, very slow process. 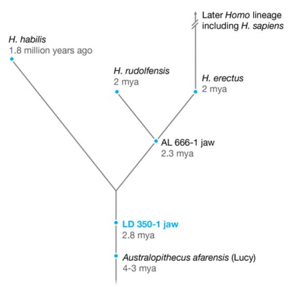 I find this story particularly timely, because I have found myself, perhaps like many of you, growing impatient with a world that seems ever more intent upon complete and utter self-destruction. I look around the world and see new forms of slavery and abuse, and wonder what happened to all the progress we made in the 1960s? Did we actually make any progress, or have we been fooling ourselves? Is there no relation to evolution and the way we treat each other as a society? Our tools have changed, but have our habits and instincts? We still kill each other over little patches of land or control of a resource. I find it hard to believe we can’t do better after three million years.
The historical record shows we have undeniably evolved physically and mentally. I just wish our spiritual evolution—the part of us that makes us loving, compassionate, forgiving creatures, had kept up. If the pace of our spiritual evolution was the same as the pace of our physical evolution, I think we would be completely different beings, inhabiting a completely different world right now.

To be clear, I do not think we are physical beings that contain a spirit. That is dualistic thinking. There is no duality, there is only One and Oneness—but coming to that realization requires spiritual evolution. This is the sort of evolution exemplified in highly enlightened and connected beings like Moses, Buddha, Jesus and Mohammed (in chronological order).

Spiritual evolution is our ability to connect with the something greater than ourselves we instinctually and historically call God. This is not separate from our physical nature. This is not an alien architect. This is not a white guy with a beard in heaven. Those concepts are evidence of how little we have evolved spiritually. As we have naturally moved into new physical and mental forms, our ability to understand our interconnectedness with each other, with our planet, and with the Infinite Fundamental Force of the universe seems to have been stunted.

I believe we are deeply within a new phase of human evolution, one that is more about our spiritual connection to each other through the realization of our Oneness with God. This movement towards love meets with resistance form the establishment, because it distributes power equally among God’s people (which is all of us) and removes power from the hands of the wealthy few who have enslaved every single one of the rest of us. It is an evolution that helps us perceive God as the force that runs through and creates everything, rather than as a being who looks and acts all too human. It’s an exciting time to be alive, and one in which finally, inevitably, we might realize the incredible lightness of being that comes from awakening to a much more evolved state of being.

Meditation: I am awake to the love I am. Help me awaken others.