Living in the Mystery, part 2

I have often thought of the Big Bang as an explosion of God’s consciousness, a self-awareness moment that created all physical matter. What if the Genesis creation myth is superimposed on Big Bang theory? Could not God be Creator by simply becoming self-aware? Knowing that Big Bang theory also presupposes an eternal universe (just a very small one), this allows for God to be preexistent and eternal also. Rather than the alien sculptor portrayed in Genesis, and rather than discounting God because of our scientific advances, perhaps we can reconcile the two by expanding our ideas about the nature of God, the way our universe has been expanding since the Big Bang. 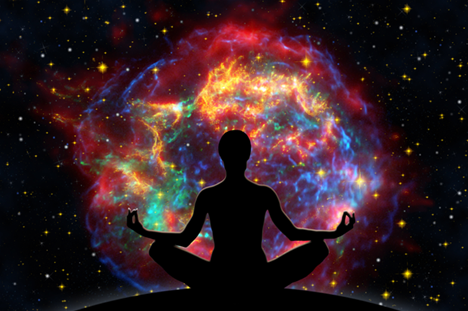 The universe has always existed. God has always existed. The two things are more mysteriously interwoven than we are capable of understanding. Reimagining our faith through science is an expansive, freeing experience. Science allows us to consider a God that’s not created in our image, in new ways that get us outside of the alien architect, humanoid, Santa-Claus, Judge and Jury God of old.

There was a Big Bang, and before that, there was still something. God was, is, and always will be, mysteriously creating through the conscious core of God’s very self. We are not and can never be separated from God, because in an explosion of imaginative creativity, God formed the atoms that form the stars, the stars that form us, and the parallel, warped space-time universes that imply eternal life as an aspect of our ever evolving and changing consciousness. If the universe and God are preexistent, then the matter used to create matter before matter existed can only be consciousness. This also implies that everything is created from the material consciousness of God. We are more a part of the being of God than we’ve ever imagined, and working on realizing and experiencing that astoundingly intimate relationship is an important step in our spiritual evolution.

The more we learn about the universe, the weirder it gets and, for me at least, the more it proves God is a beautiful, loving, and infinite energy constantly pushing the universe, and everything in it, forward to realization of Oneness. There is no reason faith and science cannot coexist, and more importantly, drive humanity forward as we continue to strive to create a more loving, compassionate, peaceful and equitable world

By the way, the first person to propose the universe was expanding, and that it began with an explosion from an impossibly small point? Monseigneur Georges Henri Joseph Édouard Lemaître, a Belgian astronomer, professor of physics—and Jesuit Priest.

Meditation: I am part of the infinitely expanding mind of God. And so is everyone else.