- September 24, 2015
The stories we read about Jesus in The Bible draw from a variety of sources: The historical Jesus, stories about Adam and Moses, and even the life of Buddha. It may surprise you to think that anything in the Bible is related to Buddha since we tend to think of it as a Jewish text. Indeed, the Bible is a product of Jewish culture, but no people develop their ideas about anything in a vacuum. Other cultures always surround us and influence our ideas--both intentionally and subconsciously. The Jewish people who authored every story and epistle in the Bible were constantly surrounded by (and often subjugated by) other cultures. 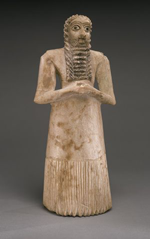 The archeological evidence is also incontrovertible: The first Israelites were an amalgamation of Canaanites and Amorites who migrated into what is now Egypt and Syria in the early second millennium BCE. They were multicultural and henotheistic from the beginning (Henotheism is the belief in many gods with Yahweh as the Supreme Being--references to the "Divine Council" in Job and other stories prove this). A dazzling variety of ideas influenced their beliefs about God and our human relationship to God. It is highly likely the early Jewish culture developed their ideas about monotheism from Akhenaten, an Egyptian Pharaoh who was, for all intents and purposes, the first monotheist. Ancient texts inform us that true monotheism--the belief in only one God likely didn't evolve until the Babylonian exile in the early 600s, BCE. This was a full century after Buddhism had already taken root in the Ancient Near East.

It is my opinion that the inherent Jewish willingness to think deeply about God based on new ideas and input from other cultures would have been both enculturated and epigenetic by the time of Jesus. Since Buddhism was already a well-established school by his time (it was 500 years old), it doesn't surprise me at all that what Jesus and Buddha taught is so similar.

Jesus' life as told in scripture is remarkably similar to Buddha's: Prophets foretell of their births as great spiritual leaders. In both cases, they are "kings." Buddha is born a prince who would be king, Jesus is called the "prince of peace," and "King of the Jews." Both have a choice to make about their royalty: accept it and rule over a nation, or reject it and reveal deeper spiritual truths to people. Both reject any earthly kingship and change the world by revealing God as Universal Consciousness. Importantly, they both reveal that we are made to connect to the Universe in a profound and meaningful, life-changing way. 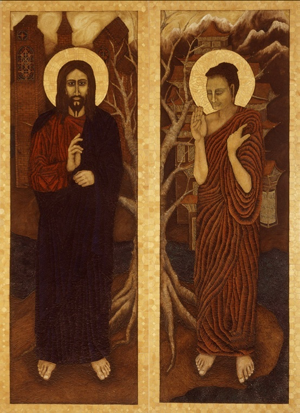 In both the Jesus and Buddha cycle of stories, the teachers die and are resurrected. This idea of resurrection is perhaps the most powerful metaphor in either story because after death they are transfigured into new, spiritual beings. Buddha becomes enlightened, and Jesus literally becomes en-lightened, described as a radiant figure clad in flowing white gowns, surrounded by a blinding light (Matthew 17:1–9, Mark 9:2-8, Luke 9:28–3, 2 Peter 1:16–18). This is exactly how people described the Buddha when they saw him meditating (Buddhacharita 8:8, "Like a second form of the lord of the gods, like the personified glory of the universe, he lighted up the entire wood like the sun come down of his own accord").

Rescued. Another metaphor found in both the Buddha and Jesus cycles. We are rescued by a power higher than ourselves from the things that drown us. Sometimes that power appears in the form of a little girl; sometimes it's Jesus. In whatever form God appears, the idea that we can be rescued from this life that has hypnotized us into believing we are less than we are, is the main theme in Buddhism, Judaism, Christianity, and Islam. We all have much more in common than we are allowing ourselves to understand.

Both men make it their life's work to end human suffering by teaching spiritual practices that make us more compassionate and empathetic human beings, and detach us from our reliance on material goods. They and their disciples feed the hungry, heal the afflicted, and fight systemic evil by first connecting deeply and personally with God. Now, Buddha didn't use the word "God" the way Jesus did (although in truth, Jesus never used the word "God" either, instead referring to Universal consciousness as "father," a word that for him implied the intimacy Buddha found in the Universe).

Jesus and Buddha understood that when we connect deeply with Universal Consciousness, we are forever changed--resurrected. Both the gospel stories about Jesus and the "biographies" of Buddha are dripping with metaphorical meaning and were written with the intention of revealing spiritual truths, not historical facts. They are strikingly similar stories intended to reveal to us a better way to live by connecting with the creative, loving energy of the cosmos. This idea is in part why Jesus refers to God as the father. In his time, the father was the head of the household. Without question, you did what your father told you to do. In the same way, Jesus wants us to understand that we should trust in our experiences with God and just go with the flow.

At this point, it shouldn't surprise you to know that this is very much what Buddha taught as well. By rejecting the material world, we end the suffering that keeps us disconnected from a higher state of consciousness--suffering that literally makes it difficult for us to keep our heads above water.

Jesus was a monotheistic Jew, who believed in a personal relationship with God, not a micro-managing, judgmental, punitive God. His language and actions reflect this to the point that even when bloodied, beaten, and hanging from the cross, Jesus forgives.

The henotheistic Hindu culture surrounded Buddha, who flatly rejected the concept that there were any deities controlling human life or the universe in general. He strove to end suffering by teaching detachment from this world of cruelty and torture. Buddha points to Nirvana in much the same way Jesus points to God. Both ask us to think more deeply about life, the universe, relationships, and the way we structure human cultures. In fact, both ask us to be revolutionaries by rejecting the status quo and exemplifying the righteous Noble Eightfold Path.