Into the mystic, part 1

- January 13, 2015
We’re all familiar with the famous story of Adam and Eve’s banishment from the Garden of Eden. Obviously, this is not meant to be a historical, literal story. It is a deep and powerful allegory. For centuries, theologians and philosophers have wrestled with the meaning of this story, and Christianity has largely adopted the idea that because of Adam and Eve’s transgression, humans fell out of God’s favor. Eventually, God sends Jesus as a sort of sacrificial lamb to right our relationship.

However, this interpretation was made before the advent of evolutionary theory. Paul, Augustine, and other church leaders who adopted the idea of humankind’s fall from grace thought humans were created whole cloth, separately from the other creatures. We know this is not true. We know that we have evolved over millions and millions of years, everything on the planet from atomic particles that fell to earth from the stars. All life started with single-celled, asexual organisms, and over the billions of years of the Earth’s existence, more and more complicated life forms have evolved. Modern humans have only been around for 250,000 years or so. Knowing that life slowly evolved, the idea that we have somehow fallen out of God’s favor no longer makes much sense. You can’t fall from something you never had in the first place.

So perhaps an evolutionary view of spiritual growth also makes more sense. Perhaps it’s not that we have fallen from grace, but rather that we are always moving ever closer toward unification with the mystical. As we learn more about the universe, and ourselves, we are beginning to realize that reality is much more complicated and mysterious than we’ve ever imagined before. Our ideas about God have changed from a bearded man in the sky to a more intimate, less-definable, conscious energy that unites and ignites all life.

If we allow quantum physics and string theory to influence our ideas about God, the way ancient ideas about creation influenced their ideas about God, then for us, God is the original harmonic, whose music created and continues to create everything that exists, one magnificent star factory at a time. In the beginning was the Word, indeed (John 1). 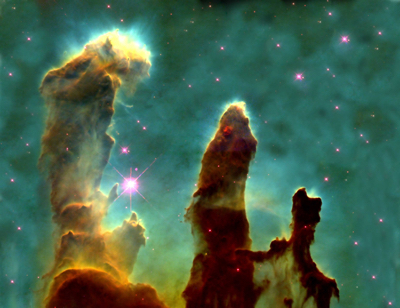 Prayer: I am awed by the vast mystery of the universe, and honored to be a small piece of this atomic explosion of consciousness. Ignite my imagination and push the boundaries of my faith, Infinite One, so that I am always evolving, always moving closer to Oneness with your Infinite Love. Amen.