The Nature of Jesus, part 1

- January 27, 2015
One of the great debates within Christianity is the nature of Jesus Christ. Was he a human? Was he God incarnate? Was he both? Does it make any difference? Is it a question anyone cares about? Followers of and believers in Jesus have wracked their brains with these questions for thousands of years.

Shortly after the Romans murdered Jesus, his followers began thinking of him as more than human. It’s important to recognize just how devastating Jesus’ death was to his followers. Many of them (not all of them) believed Jesus was the promised Messiah of their Bible—the Hebrew Bible, the only Bible in existence at the time. How could the Messiah be killed, and by human hands no less? The psychological trauma caused by Jesus’ crucifixion cannot be underestimated. The disciples’ worldview was shattered. Could the reports of Jesus appearing after death, the empty tomb, all the mythological trappings of his story, have been psychosomatic? 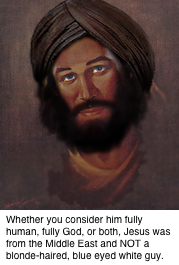 How you answer that question says a lot about your Christology (the nature of Jesus). There is no doubt in my mind that Jesus was a human being, and that the stories of the resurrection and his appearances after death are stories intended to convey a powerful message about humanity in general, not Jesus specifically. They are not historical facts. They are parables. I believe God was intensely present in the person of Jesus, but I also think Jesus was trying to tell us that God is just as intensely present in every single one of us. So in a way, Christ was God in the flesh, but God in the flesh just like you and me.

This idea became heresy a couple hundred years after Jesus’ death (and even today progressives like I take flack for it), when the organizing church came up with the idea of the Trinity to explain that Jesus was fully human, fully divine, and also an ethereal, indefinable spirit. We can still use the idea of the Trinity to convey different aspects of God, but I think we have better language to use in our postmodern, scientifically enlightened world.

The way we think about the nature of Jesus affects the way we think about our relationship to God. For too long, Christians have exalted Jesus to the right hand of God. This is idolatry, and it gets in the way of us truly connecting with the divine in the manner portrayed by the Jesus stories. By exalting Jesus, we have destroyed the power of his stories. Exalting Jesus above humanity and equating him with God makes it impossible for us regular folk to connect with God directly. The exalted Jesus of a high Christology means only Jesus is, was, or ever will be God in the flesh.

So now, Christians pray through Jesus, we pray to Jesus, and we place all the burdens and sins of our world on Jesus’ shoulders. He is, in every way, our scapegoat. We are conveniently absolved of any sort of responsibility for our own spiritual progress, because Jesus has done all the work and taken all the blame, once and for all. Worse, we have been led to believe that we cannot have a direct relationship with God. This high Christological view has stunted our spiritual growth, and I believe is completely disingenuous to the real power and intent of the Jesus stories—stories intended to make us more responsible, caring, loving, Christ-centered, God-connected human beings.

Meditation: Give me the courage to take responsibility for my own actions, to apologize to those I have wronged, to forgive those who have wronged me, and to take the steps necessary to ensure I always act from a place of love and compassion—just like Jesus. Amen.