- January 06, 2015
For thousands of years the foundation of the Abrahamic faiths (Judaism, Christianity and Islam) has been scripture. From the Hebrew Bible through the New Testament to the Qur’an, the words of our ancestors inform how we view our concept of God, our relationship to God, and the structures we create to experience God in our midst.

Unfortunately, over time these philosophical ponderings have come to be known as “the Word of God, infallible and inerrant.” Generally speaking, what this means is that “if you don’t accept that these stories mean what I say they mean, then you are condemned to a lifetime of ruin.” When I say this is a modern concept, it’s because the people who wrote these stories thousands of years ago never, ever would have said such a thing.

Remember: In the ancient world, most people could neither read nor write. They were not stupid or ignorant people. They were busy providing for their families and their neighborhoods. The only people schooled in reading and writing were members of the priestly caste or aristocrats. Most of the priests saw it as their duty to explain their beliefs to the members of their villages and towns. They also understood that if their ancient texts couldn’t be radically reinterpreted to meet the needs of their time, that the texts were useless. In The Bible: A Biography, Karen Armstrong writes “a text that could not be radically reinterpreted to meet the needs of the day was dead; the written words of scripture had to be revitalized by constant exegesis.”

Today exegesis has come to be the study of what the texts meant in their historical context. This is not the way our ancient Jewish rabbis (like Jesus) thought about Scripture though. For them, exegesis wasn’t about figuring out what their ancestors intended the text to mean—it was reconfiguring the text so it meant something in the present era.

Our task as a 21st Century church is to do the same thing. If scripture is to remain relevant to us today (and it is possible it is no longer relevant, something we also need to discuss honestly), then we must find meaning in it for our modern era of science and reason. How do we do this? It’s pretty easy, really. Consider the first few verses of Genesis: In the beginning God created the heavens and the earth. God said, “Let there be light,” and there was light. This sounds very much like the Big Bang, which we now understand was the beginning of our universe. The ancients couldn’t have known this, of course, and the idea that God created the heavens AND the earth betrays their dualistic mindset and their idea that the universe was a three-tiered system. For them, heaven was above the earth, which was above the underworld. They also thought everything was surrounded by water: 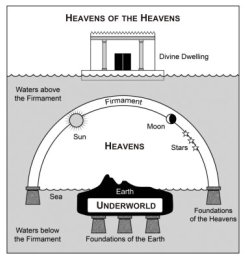 One of the benefits of space travel and giant telescopes in space is that we know, beyond a shadow of a doubt, that the earth is simply a small planet in a sea of billions and billions of planets. This knowledge must inform our ideas about God and the way we read scripture.

Is it possible to use a postmodern, scientific worldview and still garner meaning from these ancient and beloved texts? I think so. It just takes the will to let go of centuries—perhaps millennia, of bad interpretation and the idea that the things we read in the bible or the Qur’an are somehow infallible and never-changing. In fact, reading our ancient texts that way is an affront to the people who originally wrote them, intending them to be rethought, reworked and reinterpreted.

Science and history—real history, not mythology, are the cornerstones of our 21st Century faith foundation, and must be one of the important lenses through which we read ancient literature like The Bible.

Prayer: Enlighten me, Infinite Oneness, the way our entire universe was and is brought into being by your Infinite Light. Amen.