- April 08, 2015
It should be apparent by now that everything that exists evolves. The entire universe has evolved from a singularity of some sort. And while our understanding of reality is changing (an evolution itself) and our idea of a one-time Big Bang gives way to a universe that has always existed in some reality or another, our universe—the one we physically inhabit right now, is still evolving. There is no doubt all life on this planet began as very simple, single-celled organisms that, over millions of years, slowly began their crawl toward sentience and civilization. Everything evolves.

Just as life, planets and stars evolve, so do our created human systems. Economic, political and religious systems all change over time. Yet, while the evolution of the universe and life seems linear—from a less complex to a more complex place; from a less conscious to a more conscious awareness, the evolution of religion (and politics and economics) seems to ebb and flow. We make a few steps forward, and then fall back a couple of steps. We make some spiritual and religious progress, then devolve into superstition and tradition for the sake of tradition, before we work our way out and forward again. 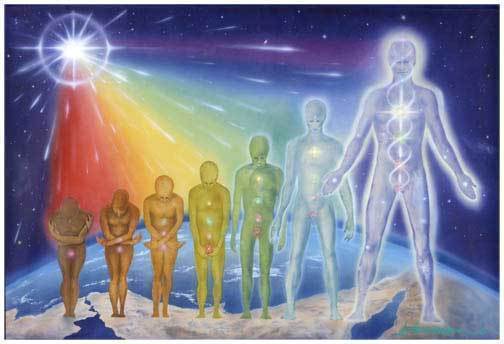 As we evolve as spiritual beings, we share our ideas about what it means to be spiritual with others. Most often, we do this through religious systems. Initially, religion will be a set of practices and beliefs that are shared by a community. That community will develop rituals—the patterned, repeated enactments of a community's myths. Ritual evolves very slowly, and over time it becomes tradition. These traditions eventually lose their meaning for religious communities removed from the progenitors of the original myths and rituals by generations, centuries, or even millennia. At that point, a reformer (typically an entity that is more spiritually evolved) comes along and recreates the religion, usually causing all sorts of havoc as traditions and myths are shattered.

Jesus is this sort of reformer. He is born into a Judaism that is being held hostage by a ruling class of priests who have allowed the secular society—the Roman Empire, to run roughshod over the Jewish people. The priesthood has locked God up in a little box and told the people that only the priests can read the Holy Scripture, only the priests can communicate with God, and only the priests can absolve people of sinful transgressions. Of course, the priests have also convinced the people they are fallen sinners, which keeps the religious mechanism working.

All of these ideas and practices are in direct opposition to the God Moses introduced to the Jewish people during the Exodus—a God who feeds people directly (the parable of the manna, or al-Mann wa al-Salwa), and whose communication through a singularly spiritually evolved leader (Moses) is intended not to set that leader apart, but to inspire that leader to lead others to their own spiritual connectedness to God (the promised land). It is a story about awakening people to a higher conscious awareness of God's love in their midst, wherever they are, no matter how horrible the situation. Moses' revelation is not about beating people up for misbehaving so badly that God then withholds love. God never withholds love from anyone.

As the revelation of Moses evolves into a practiced set of rituals, myths, and ultimately an organized religion, the practices and traditions themselves become more important than spiritual evolution. The system becomes about keeping the system intact, not about the spiritual evolution—some might use the word salvation, of individuals.

So when Jesus comes along, an incredibly spiritually evolved being—perhaps the most spiritually evolved being to ever walk the planet, he goes about reforming his religion. He reminds people that God is within, that we are capable of having a personal relationship with God, that the Holy Scriptures are our books to read if we want to learn, that everyone is beloved, created from love to be creatures of love.

As Jesus gathers disciples, a reformation of Judaism begins—not the first Judaic reform, and not the last. I am convinced Jesus had no intention of starting a new religion, only of reforming the religion he loved, the religion of his parents and grandparents. He saw the spiritual message of Moses taken away from the people. Jesus saw his people enslaved by religious tradition as well as an occupying army, and he used Rome as a powerful parable for the spiritual bondage in which he saw the Temple Priesthood keeping his people. Eventually, these parables get him killed. This leaves his students without a leader. The reformer has been killed.

The disciples do their best to keep Jesus' teachings alive by remembering (and eventually writing about) his teachings and mimicking his life to the best of their abilities. An alternate economy of sorts is formed, as disciples gather in small groups to share their goods and services with one another, as their Jewish ancestors did in the 8th Century BCE. Yet, Jesus' ideas aren't really making any real traction within traditional Judaism, and the fact many of his followers call him Messiah doesn't help. Without a strong leader, it seems the spiritual revelations of Jesus might vanish.
Into this void steps another reformer: Saul of Tarsus, first a zealot intent on wiping out the Jesus movement, now a zealot intent on keeping it alive at any cost—even if that means inviting non-Jews into the group. This single action—the invitation of Gentiles into a Jewish movement without first converting them to Judaism, would prove to be the blessing and the curse that forever transformed the teachings of Jesus the Christ.

After a few hundred years go by, this Jewish movement is now almost entirely Gentile. Importantly, it is a new religion called Christianity, and few, if any, of its members know anything about Judaism. Jesus the reformer is turned into Jesus the Son of God, founder of a new religion—a state religion, no less, the official religion of the Roman Empire. A few hundred more years go by, and rites, rituals and traditions are codified. A new priesthood develops, and they become the leaders of the Holy Roman Empire. They alone are allowed to read Holy Scripture and interpret it for people. They alone can absolve people of sin. They convince people we are all sinful in the first place, an idea that couldn’t be farther from the spiritual truth revealed by Moses and Jesus. Just like the Jewish High Priests, the new Christian religion has created the exact same hierarchical system, even more complicit with the ruling secular society than the Jewish system that preceded it 1000 years earlier. Because this time, the Pope is the Emperor.

Two reformers enter this scenario. The first is the Prophet Muhammad (peace be with him), who sees the problems inherent in a religious state. Through his revelations, he creates a state that completely separates religion and politics, and urges his followers to love everyone as they love themselves. For as long as he lives, Arabia is the only place on earth that Jews, Christians and Muslims can live together in peace. When he dies, there is a power struggle, and Islam goes through the same process that Judaism and Christianity did. A Caliphate is created, I am sure much to Muhammad’s chagrin, and politics and religion once again become intertwined.

Later, a Christian reformer comes along—Martin Luther. He also attempts to reform a church that has become a political, rather than a spiritual organization. And like Jesus, rather than reforming the organization he loved, he ends up splintering it into two opposing groups: Catholics and Protestants. This split will cause more bloodshed and distrust than any schism in history. It was an unintentional result of reform and even Luther’s Protestant church has now devolved into the same sort of ritual and tradition he opposed 500 years ago.

Over the next couple of days we’ll examine what's happened in Protestantism, modern attempts at reform, and how we as spiritually evolving beings can reignite the church so it is once again a place for spiritual evolution, rather than political control.