People formed ideas about gods and our relationship to them even before we settled down into civilizations. Most came to the conclusion that the gods existed in another realm—some sort of heaven, apart from human existence. These gods were typically meddlesome and hypersensitive, demanding tribute from humans, enslaving humans, and often interacting with and reproducing with humans. Some of these ideas came from a lack of knowledge about the natural world, but it would be a mistake to presume that these ancient people were purely superstitious.

When we read any ancient work, including the Bible, it’s important to remember we’re reading works by and about the people who literally created civilization. They were brilliant philosophers, mathematicians, scientists and engineers. These are the people who created both oral and written languages, the idea of civil justice systems, aqueducts, the wheel, and everything that eventually shaped our modern society. Discounting them as primitive, superstitious ignoramuses is a mistake. They were nothing of the sort.

As their civilizations became more complex and as humans began interacting with people who were different from them, ideas about spirituality and the nature of god(s) evolved. For thousands of years there were gods of the fields, the hearth and home; gods of war and peace; gods of wine and food. Every household had its own protective god. Over time though, gods became God, who was still part of a pantheon or ‘divine council’. This God still pulled the strings, causing floods and famine when we pissed him off, rescuing us from disaster when we proved our loyalty.

Even today, our ideas about God still very often reflect too human traits. Every now and then, though, someone comes along to teach people that God is not an outside entity with human characteristics, but rather, God is a spiritual force that dwells within each and every one of us. The very idea of spirit in both ancient Jewish and Greek thought is about our inner being. The Greek words we translate as “spirit” have to do with our psychological, intellectual, and spiritual aspects—everything that is non-physical. From beginning to end, the Bible is about our quest to understand this more-than-physical nature. Every single story can (and should) be read as a metaphor about becoming the Christ.

For example, what is the story of Exodus like if we read it not as a story about slaves escaping from Egypt, but instead as a story about escaping from the bondage that separates us from spiritual oneness with God by awakening to spiritual wholeness?
Think of the slaves as representative of every human being on the planet. Pharaoh is symbolic of the trappings of human civilization—the comforts of the physical and our quest to build more, consume more, control more. The escape of the Jewish people from Egyptian slavery is the release of our spirit from the 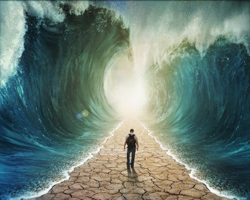 bondage of commerce-based civilization. The parting of the Red Sea is what happens when we awaken to our inner spiritual power and God-connectedness, which clears what was once an impassable obstruction and leads us right to the Promised Land—Oneness with the very being of God. The thoughts and habits that once bound us are obliterated by the cleansing wave of the spirit as the walls of the Red Sea come crashing down upon them.
There is a deep spiritual thread—in fact, a revelatory thread about our spirituality, woven throughout both testaments of the Bible. We just have to read the stories this way—the way in which I believe they were intended to be read, something the ancient people they were written for would have understood. Thousands of years removed though, we have to be reminded how to read the Bible—and that is as spiritual metaphor from beginning to end.

Meditation: Give me new eyes to see beyond the ink on the page, into understanding that leads me closer to Oneness.