- July 15, 2015
We tend to think that the word “cynic” today has a very different meaning than it did in Jesus’ time. We use the word derogatorily. But in truth, it was the same thousands of years ago. When we call someone “cynical,” we usually mean that they are people with a distrust of others; people who think human institutions area always corrupt. A cynical person sees the glass as half-empty, for example. A very cynical person sees the glass as half full, only it’s half full of poison. I’ll admit to being a little cynical. I think Jesus was as well. And Paul, and anyone who has had a glimpse of a world conducted by God’s love rather than human greed. 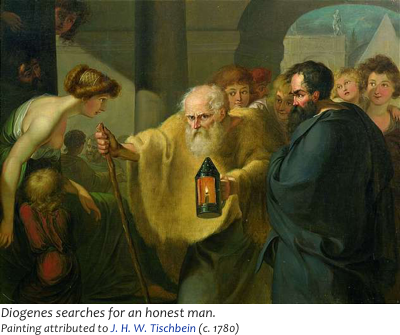 The word cynical  is gleaned from the activities of Cynic philosophers way back in the day. The name is derived from the Ancient Greek κυνικός (kynikos), meaning "dog-like.” Cynics were likely first called “dogs” because they taught in the streets rather than the “proper” philosophical schools of the time. The term was meant as an insult for their rejection of conventional manners, and their decision to live on the streets. Diogenes, in particular, was referred to as the "Dog", a distinction he seems to have reveled in.

Cynics, Jesus, Paul, the disciples, and Gandhi for that matter, chose to live in what looked like poverty, railing against what they saw as corrupt social values and institutions. They urged people to reject money and live in smaller, more communal groups. The early Cynics, who I think influenced the thinking of Jesus, were often ascetics—people who pursued spiritual enlightenment by abstaining from worldly pleasures.

Notably, Buddha (500 years before Jesus) grew up in an ascetic tradition, famously studying in every major ascetic school in India before proclaiming them all a load of crap (Buddha the Cynic). Yet, he still found enlightenment sitting quietly under the Bodhi tree—rejecting the ways of the world and teaching that the path to higher being is the road less traveled, the road leading away from all worldly ideas and ideals. It’s not a coincidence that Jesus often goes out into the desert, or to a distant shore, or into a garden, to be away from people and instead surrounded by the being of God found in nature.

The spiritual path is difficult, and it’s easy to be cynical, thinking the world will never get better, or worse, that it cannot get better until some sort of magical “end time” when God destroys everything except the few thousand people who have said the right magic words (how’s that for cynicism?). It’s easy to be cynical when your spiritual teacher, the person you call “anointed,” is crucified for crimes against the state. It’s easy to be cynical when your leader—a pastor, a preacher, an activist, a man of color, is murdered for demanding equal treatment for people whose skin color is not white.

It’s easy to be cynical, and it’s probably healthy to hold our social systems to a higher standard. But cynicism can also cause us to lose hope altogether, to reject the ways of the world and live alone. I don’t think this is what Diogenes had in mind, nor Socrates, nor any of the great Greek Cynics. Rather, they wanted to call attention to a corrupt world and the corrupt nature of human beings, in order for us to be more consciously aware that things need to change. In this way, they absolutely laid the groundwork for those who came after, like Buddha, Jesus, and Martin Luther King, Jr., and all of us who continue to fight for a more just, loving, less material, more ethereal society.

Meditation: Connect me to a higher love.