- July 28, 2015
Richard Rohr, the famous Franciscan author and spiritual guru, talks a lot about God as the “unified field.” This unified field is what connects everything physical and metaphysical (and here the metaphysical is not supernatural, it’s simply “meta” in its truest sense—that which underlies everything else). For Rohr and other people of faith, especially those of us with both mystical and scientific leanings, the unified field is God.

Einstein spent much of the latter half of his life looking for the scientific equivalent of this unified field—the force that connects electricity, magnetism, gravity, time and space—the meta that underlies all the natural forces.

In his day, quantum physics was a new discipline, and some of its important theories seemed astonishing to Einstein (and Heisenberg and Planck and the other geniuses who were starting to formulate the laws of quantum mechanics). You see, quantum mechanics creates a bit of a schism in the scientific world.

For centuries, physicists operated under the notion that Newton’s laws described everything in the universe. We all remember some Newtonian physics from elementary school: the way levers work, action and reaction, gravity, magnetism, electricity—these are all described by Newtonian physics.

The problem is that with the discovery of atoms and things smaller than atoms (protons, neutrons, electrons, quarks, gluons, leptons, tachyons etc.), Newtonian laws no longer worked. This is how the science of quantum physics developed. 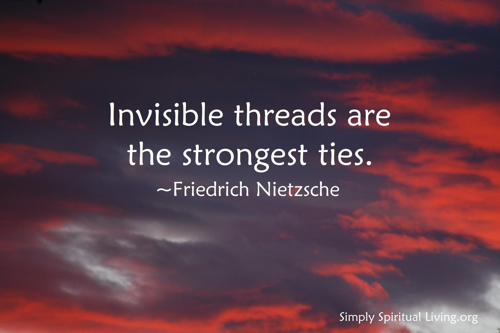 Quantum physicists postulate, discover and state laws about the subatomic world—a world very different from the big physical world we inhabit; a world that does not obey the laws of Newtonian physics. Quantum physicists use terms like “spooky action at a distance,” which is about as un-scientific sounding as it gets, but which aptly describes the way atomic particles interact with each other even when separated by thousands of miles.

So, for a long time now, physicists have been struggling with a way to find and prove what it is that ties the big, Newtonian physical world, and the small, quantum world together, because you can’t have a universe that operates under two sets of different laws.

This means that Newtonian and quantum physics are subsets of a larger law—that there is a single foundation upon which both the big laws of Newton and the smaller laws of Einstein are built.