- April 13, 2016
As we continue our Easter journey, I think it’s important for us to take a look at one of the most important figures in Christian history: Augustine of Hippo, or as I like to call him, the guy that ruined Christianity for 1500 years. 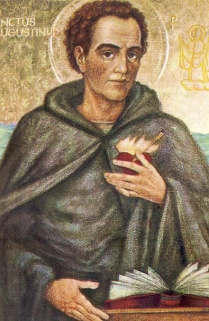 Augustine’s ideas have nothing to do with Jesus Christ, yet they have formed the basis for almost all Christian thinking since the late 4th Century. Augustine’s hypothesis is that humans are worthless pieces of garbage. Augustine made the doctrine of Original Sin foundational to his theology (what we think about the nature of God) and Christology (what we think about the nature of Jesus). The doctrine existed before Augustine—the first mention is probably by Irenaeus in the 2nd Century, but nobody had ever taken it to such lengths as Augustine.

His thinking is along the lines of the following: Adam committed a horrible crime against God by eating from the tree of knowledge of good and evil, for which humans were kicked out of the Garden of Eden. We can never, ever redeem ourselves for that sinful transgression—only God can, and God did, in fact, redeem us and forgive us for original sin by incarnating as Jesus Christ, then committing suicide on the cross.

Okay, I’m paraphrasing at the end there. Augustine didn’t see it as suicide (although if God and Jesus are one it can be nothing else) as much as he understood Jesus’ blood sacrifice as atonement for original sin. Augustine comes up with these ideas by completely misreading the Bible, in particular, Paul (Romans 5:12–21 and 1 Corinthians 15:22). He also misunderstands the First Testament idea of ancestral fault, which is that the sins of the father are transmitted to the son—something Jesus clearly states is incorrect (John 9:1-3)

Some of you might be thinking, “Well, Augustine was just taking what Paul wrote to its natural conclusion.” This is not exactly true because Paul was writing in the symbolic language of a 1st Century Jew. Augustine read Paul as a 4th Century Gentile—not only that, but Augustine read Paul as a 4th Century gentile, who was guilt-ridden over the debauched life he had led, and so presumed that because he was a jerk, then naturally, all humans must be jerks. Augustine then speculated that because it took a relationship with Christ to “save” him from himself, then it must take a relationship with Christ to “save” all humans. It’s the worst case of imprinting ever foisted upon human beings, and it continues to destroy our self-worth—and our understanding of Christianity, to this day.

The idea of original sin is a complete misunderstanding of the Garden of Eden story. It’s not about disobeying God; it’s about God taking the opportunity to incarnate into the flesh—becoming human, and experience physical reality. The tree of the knowledge of good and evil is a symbolic warning against dualistic thinking, which is human nature. We see hot and cold, darkness and light, good and evil. In truth these are not opposites, they are all part and parcel of the same thing. There is only heat—there is no such thing as cold, only the absence of heat. The darkness is only the absence of light, and evil is only the absence of good. These things are not equal and opposing forces—that’s dualistic thinking, and that’s what the tree in the Garden represents. As soon as Adam and Eve have an awareness of duality, their perfect Oneness with God is over. They have left the garden of their own volition, they have not been banished.

Leaving the garden isn’t punishment—it’s the next stage in God’s ongoing journey of creative experimentation. Leaving the garden is an ancient Jewish allegory for the creation of humankind and the beginning of the world as we know it. It’s got nothing to do with punishment—that’s a Gentile perversion of a symbolic language they didn’t understand.

So if we haven’t sinned, we don’t need to be redeemed. The whole idea of Jesus “dying for the sins of humankind” falls apart when we stop believing the lies Augustine and his ilk (Luther, Calvin, et al.) have perpetrated on Christian thinking for the past 1500 years.

Are humans perfect? Far from it. But it’s not Adam and Eve’s fault, not by a longshot, and Jesus did not die in order to make us somehow alright in the eyes of God. Jesus died because he was a political pawn in a game that involved much more than his ministry. That his death would spawn an entirely new religion was probably not Jesus' plan, since in the Bible he is never represented as anything other than a loyal and devoted Jew. It's also important to consider that the religion that developed after his death took hold not in Jesus' Jewish world, but in the Gentile world whose values Jesus preached against. It's no wonder Jesus' message became so twisted and misunderstood.

It is more in line with Jesus’ teaching and the example of his life to understand that our relationship with God is not and can never be broken. The problem lies entirely in our thinking it is broken, and that it cannot be repaired. Ye of little faith (Matthew 8:26). Sin does not stem from our ancient ancestors eating a pomegranate (they didn’t have apples in the Middle East then, that’s a horrible European translation), sin is when we refuse—because we have free will—to act like Jesus toward both God and each other.

This is not to say that everyone needs to be a Christian or a Jesus follower. Jesus’ values are universal to all world religions and philosophies. It simply all comes down to love—of God and our neighbor, so that eventually, we recognize each other as equal beloved beings of God, making it impossible to create enemies or wage war.

Augustine was correct about one thing: the sort of world Jesus envisioned requires a complete change of heart, mind, and soul, and that change can only come about when we stop resisting the call of God, and instead firmly embrace God once and for all, finally understanding we are indeed worthy—everyone.

Meditation: Awaken me to my true worth as an equal and beloved being in God.