- April 06, 2016
I’ve always found it useful to look for common threads weaving throughout the world’s religions. It seems that if a spiritual idea is common to a multitude of belief systems, then there is probably some great wisdom there. At the very least, religious commonalities reveal that in our quest to understand our place in the universe, we quite often come to the same conclusions. One such common thread is “The Golden Rule.” Every religion, theistic or not, includes some variation of “do unto others as you would have them do unto you.” Check out the chart below (click for a larger version): 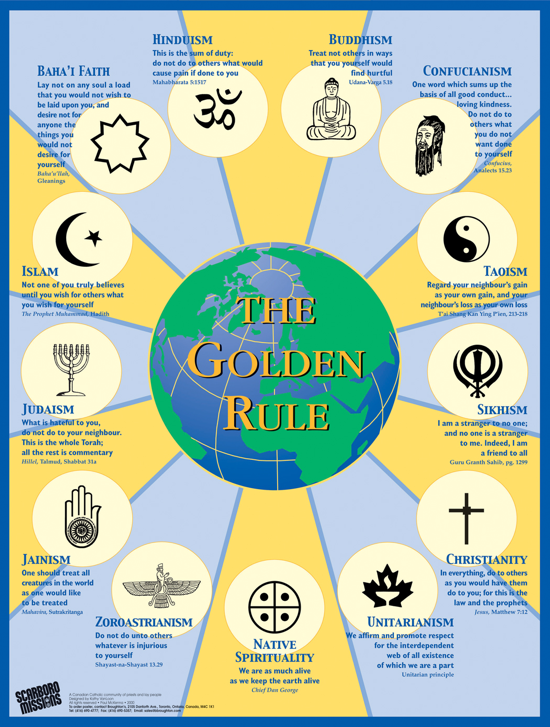 If most religious systems agree that we should be good and fair to each other, why then do we so often attempt to annihilate each other, ostensibly in the name of our religions?

I have two theories about that: First, many of the wars fought for “religious” reasons were (and perhaps are) political wars. On the ancient world stage, many of the states were theocracies. Emperors and kings were seen to be, if not gods themselves, then god’s chosen representatives. With the advent of hereditary monarchies, rulers consulted religious leaders—Cardinals and Popes, for example, before making any decisions. Often, monarchs were simply puppets of the dominant religious system, who used the ill-conceived notion of “saving souls” as a façade for colonial expansion.

Second, there is a tendency within all religions to resist syncretism—the blending of different belief systems and traditions, sometimes in an attempt at inclusiveness. Many faithful people see any theological adjustment as a dilution of the “purity” of their religion. The truth is, however, that no religion is “pure.” People don’t live in a vacuum. The idea that religion (or any human system for that matter) won’t be influenced by other religions, science, archaeology, history, biology, etc., is a bit naïve. Religions don’t just suddenly appear in human consciousness. They are created by humans in response to their surroundings, most often in a quest to answer questions such as Who am I? Why am I here? What happens after I die? Is there a God, and if so, what is God’s nature?

It takes a long time for a religion to evolve to the point where acceptance of different, sometimes contrary, ideas is possible. These ideas don't necessarily have to be integrated into the religion itself. But the sign of a healthy religion is that it is willing to reexamine its positions on a multitude of theological and civil topics. After all, religion is simply an organization of people who believe similar answers to the great questions. As people of faith, for us to grow, we must constantly be self-reflective, measuring what we believe against what others believe and what we continue to learn about the workings of the universe. Why shouldn’t we expect the same from our religions?

There are many commonalities to be found in the world’s religious systems, and one of the things I have discovered is that every single one of those common threads has something to do with love. Love God. Love each other. Love the planet. Love your children. It’s a breathtakingly beautiful message, and one I continue to pray we, and the religions we affiliate with, will finally start to practice.

Meditation: Make me an entity of love, always willing to talk to and learn from people who think differently than I.