- August 26, 2015
One of my continuing struggles with religious institutions is the worship experience itself. Even the term “worship” drives me increasingly crazy. Who or what are we worshipping, and why? This ancient, archaic idea that God “demands” worship and unwavering loyalty (and what that loyalty means can often only be interpreted by a specialist) is unhealthy. We’ve been taught to accept and even pursue a codependent relationship with God, and I don’t think that is either what God intends (if God even has intentions, which is debatable), nor in any way, shape or form good for our mental and spiritual health. 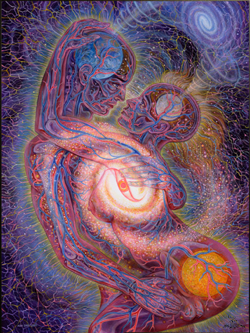 Most church experiences today—especially Sunday services, remain locked into this very ancient idea that we assemble to worship God. They present us with the misbegotten idea that if we do something wrong, God will punish us—kick us out of the Garden or damn us to eternal Hell. These ideas don’t reflect the covenant relationship that our most ancient stories reflect. Worship out of fear of condemnation and punishment is abusive. We shouldn’t accept that sort of abuse from our significant human others, and we shouldn’t accept it as a healthy paradigm for our relationship with God. The Gospel of John says God is love. Paul says love is the most important element of Christianity. I ask, where is the love when one half of the relationship demands worship?

It seems to me we are presented with two ways to think of God, both of which are represented throughout human history in a variety of works from many different cultures. The Bible also presents us with both ideas. First, there is the idea of God as a being who lives on Mt. Olympus or in Heaven, and who insists we are his (this view of God is almost always patriarchal) subjects, and that we must worship him or be subjected to floods, banishment (both corporeal and spiritual), or other forms of torment for not obeying laws which, eventually, God even admits are impossible to obey. It’s the perfect codependent setup, and the church falls right into it: I’m going to give you a set of rules I know you can’t follow, and I’m also going to give you the only solution to not being able to follow those rules. It would be brilliant if it weren’t so inherently evil.
The second idea about God doesn’t require codependence and removes all gender identification from God. This is the idea that God is the meta—the underlying consciousness, perhaps even conscious energy, of all being. In Buddhist thought, this is perceived through enlightenment. In Christian thought, this is exemplified through the embodiment of perfect Oneness in Jesus, called the Christ. It’s the idea of Christ consciousness, which of course predates Jesus by thousands of years, and is a relationship with God which all humans not only can achieve, but are actually born into.

This second ideology allows us to participate in a relationship with the Universal Consciousness, not be subjugated or threatened by it. It’s a real, healthy relationship in which we share experiences with God, rather than bow down at God’s very human-looking feet.

In this increasingly post-religious world, it’s important to get beyond humanistic and anthropomorphic ideas about God. Quantum physics is giving us new language to use when we talk about God, and helping us think more deeply about how we relate to each other as a variety of emanations from a single energy source. We are, all-in-all, simply energy. So if we are going to believe there is a God, then God is the ultimate energy, and doesn’t demand a thing from us. Energy quite naturally creates and sustains. Our only job as people who believe in God is to have a deep, permanent relationship with this Universal Energy, and the real good news, the real gospel is that we already have this relationship. We were born with it. This isn’t a new idea, either. It’s exactly what Jesus teaches, as did many others before him.

So let’s begin relating and connecting to God, instead of worshipping.

Meditation: I AM in relationship with God, and every human, plant, and animal that exists.