Keeping it in Context, part 1

- August 04, 2015
At one time or another, we’ve all heard someone say, “Well, that’s what The Bible says, so I believe it, end of story.” For many people, The Bible is a magical book that can be read and understood at face value. This is simply not true. The Bible is an ancient book that is incredibly complex. Understanding the various letters and stories it contains takes an incredible amount of work. Much of this work has to be done exploring the cultural context in which the stories and letters were originally written. This means reading works about the Bible, not just reading the Bible itself.

Written thousands of years ago when societal conventions, laws, political, and economic systems were vastly different from ours today, The Bible “says” a lot of things that have no place in modern society. Furthermore, the modern propensity for taking everything in the Bible literally (few people in the ancient world thought the universe was created in seven literal days), rather than as the metaphor and analogy the original authors intended, creates a completely different understanding for people today than it did for the original hearers of these stories.

And there’s a major difference right there: When they were first being created, most people heard the stories in the Bible. They didn’t read them, because they couldn’t—they were illiterate. Only the extremely wealthy or privileged could read and write—and this includes Jesus, who we often think of as a wandering peasant. Well, once he was an adult, he chose the life of a wandering peasant, but somewhere along the line he was incredibly well-educated as a Rabbi. This was a special class of people who were taught philosophy, critical thinking skills, math, history, reading, writing, and importantly, the stories of their people. It was then their responsibility to save and teach the traditions and traditional stories of their people to successive generations. Why does Jesus often speak in parables? Because this is the way he was taught. Stories are easier to remember than lists. For over a thousand years, the stories of the ancient Hebrew people were carefully memorized and passed along orally. The voice of authority in society was most often the voice of a teacher. 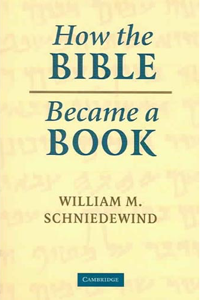 In his phenomenal work, How The Bible Became a Book, William Schniedewind, the Kershaw Chair of Ancient Eastern Mediterranean Studies at UCLA writes, “When the Bible became a book, the written word supplanted the living voice of the teacher. Ancient Israelite society was textualized. This textualization marked one of the great turning points in human history, namely the movement from an oral culture towards a written culture.” Once textualized, it was but a small leap toward canonization.

The written words became holy because as writing was developing, the written word was seen as a magical language bestowed on humans by the gods. Only the power elite could read and write. Kings wrote to each other on matters of trade and border security. Priests wrote about the gods. The common people—the majority, did and believed what they were told. One of the problems this created was an even greater divide between the people in power—the people who could read and now write, and those who could not. The written word was for the privileged few, not the masses. The ancient Hebrew stories, passed along from generation to generation, were now written down and took on the magical attributions all writings of the time held.

Schniedewind writes, “We tend to read the Bible from our own viewpoint—that is, we tend to think of the Bible as if it came from a world of texts, books, and authors. But the Bible was written before there were books. As the great French scholar Henri-Jean Martin has observed, the role of writing in society has changed dramatically through history, yet modern analyses of biblical literature often depend on the perspective of the text in modern society.”

In truth, this has been a problem throughout history. Paul sees what he wants in the ancient Hebrew Bible he knew so well, based on a changing socio-economic climate and his personal experiences. Augustine does the same thing, creating a Jesus who atones for the sins of humanity that was never intended by the original Second Testament authors (including, I am convinced, Paul). The British and Spanish empires used the Bible to justify their expansionist greed, and the consequent subjugation and genocide of indigenous peoples. Slave owners in the American Colonies used the Bible to justify their heinous and immoral practices.

Our task as modern readers is to understand the original contextual foundations of the stories in the Bible. Without understanding the context—including why the Bible was written in the first place, we can’t know what does and does not apply to modern society—and there is much in the Bible that is simply irrelevant today. In fact, if we take the time to understand the original intent and context of these stories, we might begin to understand that the stories are still being written, and that the canonization and exaltation of the Bible is a vestige of a past when writing itself was considered a magical gift from the gods.

Meditation: My mind is an open book. Fill me with new stories of knowledge, understanding and love.